Work is changing and navigating careers is becoming more challenging. Discover how employees can manage the path ahead.

The state of career growth today

It is time for a shift in how we approach careers, and the value career coaching can offer. Gone are the days when we could reasonably plot someone’s career for 10 or even five years. Workers today likely need to pick up skills that didn’t even exist when they received their introductory training – whether due to shifts in their industry or the transition into an entirely new industry that has just been born. Further complicating the matter is the fact that people’s work is simply more interconnected today.

Work has changed, and few people operate in isolation today. As a result, career management and career coaching has become exponentially more difficult. We can’t really get a sense of people’s work without understanding the context they operate in. The data shows that people are struggling with these new challenges across all industries:

In order to understand the current challenges facing career development, we first need to look at the history of the career path.

The history of career path development

Career paths are actually quite recent in the history of work. Historically, most people’s “career path” was to either take over the family business or become an apprentice under a master to learn a trade. Once you were experienced enough to take over the business/trade, you would do that for the rest of your life.

Career paths were invented in the early 20th century as the move towards mass industrialization undermined the traditional guild-based organization of labor. This need also coincided with the massive increase in military personnel for the war effort – the U.S. Committee on Classification of Personnel in the Army alone utilized skill assessments for 1.7 million men in anticipation of deployment.

It’s hard to understate the impact of turnover on early 1900s businesses – in 1920 the annual separation rate was over 100%, at a blistering rate of 123.4 quits per 100 employees. Naturally, companies were eager to increase retention, so organizational theorists began to consider how to create better matches between people and organizations. This led to the creation of HR as we know it, introducing tools like compensation packages, bonuses, paid leave and career development support.

By the 2010s, companies had managed to reduce the separation rate to an astonishing 1.5%. But with quit rates on the rise again, it seems that the traditional toolkit is no longer serving us well. It’s time for career management and career coaching to evolve yet again.

Career management processes: one-size-fits-all tech is not the answer

In recent years, we have relied heavily on managers to drive the career management process even though they lack the skills and capacity to do so. We have also invested in self-serve models where we give employees information and tools. The challenge is that they frequently lack the support they need to navigate their career.

Often these initiatives are supported by technology, but tech can only get us so far. A core problem with any technological solution is that these systems fundamentally reinforce the status quo. This is particularly problematic if you’re trying to innovate by creating new types of jobs or if you’re trying to diversify your talent pool.

A prime example of this is Amazon’s experiment with AI recruiting that they shut down in 2018. Amazon was using a predictive machine-learning tool to filter through resumes and provide the "best" applicants to hiring managers. Unfortunately, due to the history of discriminatory hiring practices in software engineering, most of the software engineers in the dataset were males. AI systems have no sense of context or history, so the hiring tool ‘learned’ that women were bad software engineers and accordingly filtered most of them out. Amazon ended up scrapping the tool as there was no way to avoid this data problem.

We can extend this challenge to innovating around jobs. Say you have a potential hire who has a unique skill set that could be valuable in a way not usually seen – e.g. a tech entrepreneur with a background in design. The AI system is highly likely to filter them out because it assumes what is "best" is what is most common among high performers in the current data set – outliers get weeded out, which reduces the organizations’ ability to find innovators.

AI systems implicitly assume that any outliers are either irrelevant or undesirable, which removes the opportunity to create new types of jobs or to do jobs in new ways. This anchors the organization on the status quo, rather than allowing for broader exploration of the solution space. As a result, AI systems can stifle innovation and impact the organization. So, where does this leave us? 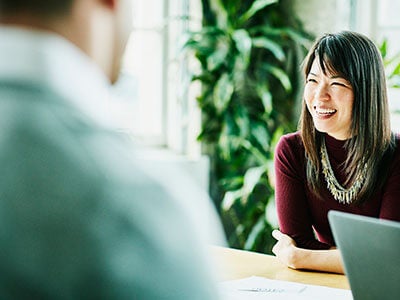 Accelerating change across the organization

Coaching is by no means new. We have records of coaches going back to the original Olympic games and today, we see them used across a wide variety of fields. You can find coaches for everything from swimming to gardening – if anything, coaching is a vastly underutilized tool in the workplace. At Korn Ferry, we believe career coaching will be a core component of success moving forward for a number of reasons:

Take the next step in career coaching today

Improvements in career coaching will not completely overhaul our management systems. A good career coaching expert will be able to help employees hone in on gaps in their skillset or figure out what components of their work are lacking. Far from reinventing the wheel, a coach can help the employee determine how to be more effective and align their goals to the organization’s, which ultimately helps the organization transform from within.

For more information on how Korn Ferry can help you invest in your people to drive career growth aligned to organization goals, contact us to learn about our connected coaching solution.