Brazil's knack for bouncing back

Down for the count a few years ago, Brazil’s economy is already back on track. Korn Ferry’s answer for the special talents its business leaders have.

As Brazil’s most recent recession took hold, inflation skyrocketed, millions of people lost their jobs, and the country’s president was getting impeached.

But for Benjamin Quadros, surviving the latest turn in fortunes three years ago required a significant change in how his company worked. Customers of his technology consultancy, BMQ, were pressuring him to cut prices. But with 70% of BMQ’s costs being people-related—and a law at the time severely limiting salary cuts—Quadros and his partner had to get creative, fast. In the end, they succeeded—but not without a lot of resourceful consolidating of some business models and several key asks of employees who work with clients. “It’s a good thing to pass through a crisis,” Quadros says. “It was a great opportunity to make changes.”

Every nation goes through good and bad economic times, but Brazil may have the patent on turbulent cycles. Go back in history and you’ll find the country has suffered through a barrage of booms and busts since it gained independence from Portugal in 1822. It’s been particularly acute since 1985, the end of military rule. In a little more than 30 years, the economy grew fivefold to become the eighth largest in the world. But over the same time span, it busted five times, with serious bouts of hyperinflation, mass unemployment, and intense political upheaval often marked by mass demonstrations and corruption. 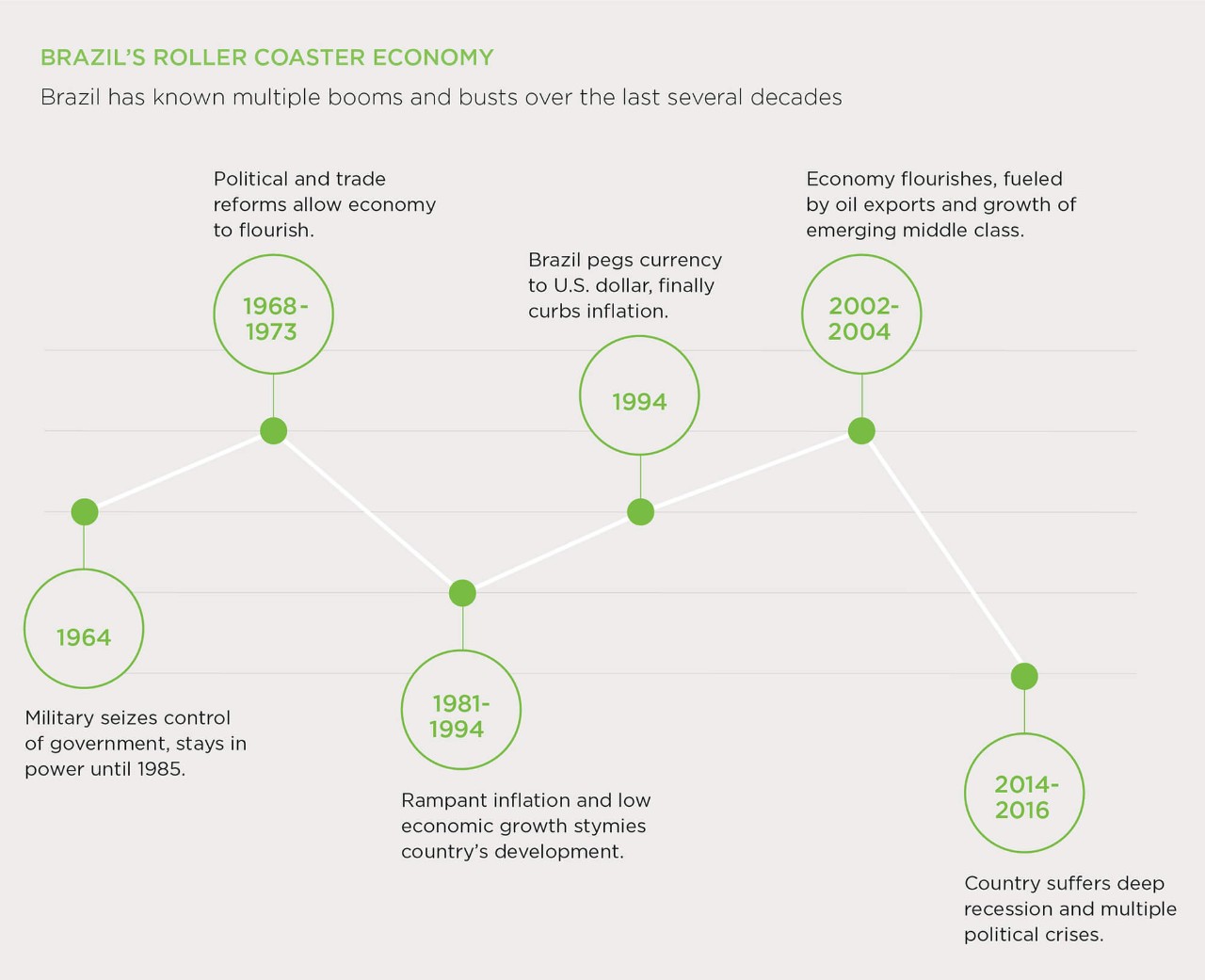 Yet, each time, the country has bounced back. The country is already on track to post the best growth in three years. Somehow, leaders both public and private have been able to get the country thriving again, and it isn’t due to caipirinhas and samba dancing. Indeed, according to research by Korn Ferry, top Brazilian leaders have considerably more agility than top leaders elsewhere in the world. Leaders here have the ability and the desire to dive right into an uncertain future and make a difference. And that offers some important lessons for leaders everywhere. “Brazil historically has been an excellent training ground for senior executives of major multinationals,” says Sergio Averbach, vice chairman for Korn Ferry in South America, which regularly holds special leadership-development seminars with C-suite chiefs and business unit heads across Latin America. “There’s a historical reason for that.”

“Every nation goes through good and bad economic times, but Brazil may have the patent on turbulent cycles."

It’s hard to believe that the World Cup was in Brazil only four years ago. A dozen new or renovated stadiums, together costing more than $3 billion, welcomed more than 3 million people to the month-long soccer spectacle. The gleaming stadiums, combined with another $8 billion in infrastructure, were a capstone to Brazil’s booming times; an economy powered by a burgeoning middle class and an insatiable demand for the nation’s oil and agricultural products. From 2009 to 2014, GDP grew by nearly $1 trillion, more than 50%. The nation spent more billions to prepare Rio de Janeiro for the summer Olympics in 2016.

But the nation plunged into a grueling recession not even a year after the World Cup festivities ended (and a year before the Olympic torch made it to Rio). The commodity cycle powering Brazil’s boom abruptly ended, and a corruption scandal touched the highest levels of business and government. Unemployment reached 12%, and millions of people took to the streets protesting the deteriorating economic conditions and waves of exposed corruption. Brazil’s president, Dilma Rousseff, was impeached in early 2015 and ultimately thrown out of office in 2016. Those days were incredibly challenging for executives like Tania Cosentino. As regional president in South America for Schneider Electric, she could see the economy in Brazil deteriorating fast. But at the same time, she knew the business had to spend heavily on digital transformation. So, she opted to restructure several local operations. While those were painful, it freed up resources for investments, including training and developing people. There was no guarantee that it would pay off, Cosentino says, although she took some solace that Schneider had been in Brazil for more than 70 years. During that time the country had gone through at least nine boom-and-bust cycles. “That history helped build us some resiliency,” she says.

But what really helped, she says, was the ability to face down uncertainty, think clearly, and act decisively—the hallmarks of learning agility. “Crisis is always a good opportunity to look inside and reinvent ourselves,” Cosentino says.

That hyper-agility is something that leaders around the world may be able to learn from. Agile leaders are unafraid to challenge the status quo, remain calm in the face of difficulty, take time to reflect on their experiences, are open to learning, and often actively seek out challenging situations.

“That history helped build us some resiliency.”

That agility was essential for BMQ’s Quadros to keep his business going. The recession didn’t dampen the demand for BMQ’s technology consulting work, but it dented the firm’s customers’ willingness to pay for it. Quadros couldn’t just cut prices, since Brazil’s often Byzantine rules about worker layoffs and salary changes made it difficult to make corresponding cuts to his labor costs. Instead, he urged his employees to find new services they could provide to customers. BMQ increased its offerings around cloud computing, blockchain, and other cutting-edge technologies. On the cost side, it streamlined several business processes. And it changed some hiring practices, focusing more on younger, less-expensive consultants it could train rather than bringing in more-experienced hands.

The crisis, Quadros says, also helped provide focus and motivation. “People are open to discussion; they understand that there is an external enemy that you need to fight,” Quadros says.

But while the agility has always been there, the most recent recession may have driven Brazilian private sector leaders even more to embrace change. “CEOs are very focused on understanding and taking action to prepare their companies for revolution, much more so than they were in the past,” says Averbach, who cites the fact that several CEOs in the country now send their CHROs and business unit heads for leadership development work that helps carry that revolution across firms.

All of which come in handy indeed if history is any guide—and another crisis hits Brazil after this upturn ends. “We don’t have hurricanes in Brazil, and we don’t have tsunamis, either,” Quadros says. “We do have crises though, and they’re important in uniting us.”