It’s How Coaches Make Us Feel

Korn Ferry CEO Gary Burnison says it’s time for leaders to remember how coaches inspired them and then pay that feeling forward to others.

I searched and searched for that dusty field, but never found it—later, I saw that it was gone. Yet that place remains etched in my mind.

While in the Midwest about a week ago, I drove to a small town in Kansas, where I spent some of my childhood. Places that seemed so big when I was a kid—like the elementary school—were actually quite small. But the one place that loomed large in my memory was a field where I learned a powerful lesson.

I was in fourth grade, and we were playing kickball. But on one particular day, the coach changed the rules. He randomly called people out when they were clearly safe and also called them safe when they were clearly out. And when it happened to me, my competitiveness got the best of me. “Why do you keep doing that?” I asked.

The coach paused and waited patiently until I was listening. “Now you have a taste of what so many people live with every day.” That had been his intent, as coach and teacher, all along—to give us a wider perspective, not telling us what to think, but rather what to think about.

Over the years, we’ve all had those coaches. Think for a moment about who they were. Some were in the classroom or the gymnasium; others were in music rooms and marching bands—and many other places as well. Later in life, we found others who guided, nurtured, and challenged us to think differently. Collectively and individually, they made a lasting impact.

“At different and pivotal points in my career I have had the opportunity to work with some amazing coaches who have helped me gain clarity about how I saw my future, but more importantly, how I could get there,” Lisa Lutoff-Perlo, President and CEO of Celebrity Cruises Inc., told us this week. “They have made an indelible imprint on who I am, and I will be forever grateful for their genuine caring and wise insight.”

Mark Arian, head of our global Consulting business, told me a moving story this week about a boss who made a lasting difference in his life. For more than 30 years, Mark has carried with him a thick folder full of notes this boss wrote—a mix of praise, direct feedback, and emotional stories that guide him to this day. As Mark told me, “Just recently, I had the occasion to reach out to this boss—my very first manager—who is now in his 80s. I told him how much his coaching and caring meant to me—and still mean to me.”

Mark read me a few of those notes: “Stick with it.… Don’t get discouraged…. You have the energy to see this through.” This is what a great manager does.

Now it’s our turn—paying it forward to others. Their aspiration needs to be our inspiration as we become that coach for them.

“I pray that I will have the benefit of working with at least one more great mentor leader; one who will energize me to take the hill, calm the crisis, transform the old way, and achieve something great with or for a team,” an executive and a member of a Fortune 10 board of directors told me this week. His words—our calling.

Amid the echo of the biggest reset of our lifetimes, a good coach can be that still, small voice.

As Kevin Cashman, our global co-leader of CEO & Enterprise Leader Development and a renowned coach, said in our conversation this week, “Coaching is everywhere around us, all the time—in life, people, examples and challenges. Coaching and learning can never be separated.”

Indeed, there is a coach in all of us. Here are some thoughts:

·  In our corner. “Coaches speak to you; mentors speak with you; and sponsors speak for you.” This description—shared with me by an executive recently—succinctly captures the roles of three of the most important people in our careers. Mentors take others under their wings and help them learn. Sponsors advocate for others, making the case for why they should get a particular assignment or promotion. And then there are coaches—the formal and the informal—and the best bring perspective with objectivity. Most important, a coach is someone to be vulnerable with. When that level of trust exists, people have the psychological safety to speak their minds—and bare their souls. As Dennis Baltzley, our firm’s global head of leadership development, told me this week, “When an environment of psychological safety exists, people know they can be candid—not only about what they want and where they see themselves, but also about their fears and failures. And that’s where all great coaching starts.”

·  When coaching meets caring. It’s not only about the coach’s expertise—or even their title, position, or seniority. Rather, it’s all about the coach’s ability to ask the right questions. Doing that requires the right mixture of caring and directness. As Kevin Cashman observed: “If coaching is only caring, it won’t go anywhere. And if it’s only direct, people will find it hard to connect. But when coaching combines caring and directness, that’s when the best outcomes happen—and the benefits flow in both directions.” And the key ingredient is heart.

·  Coaches coach. Growing up, I went to a basketball camp led by Coach Gene Keady—a legend in Kansas, who later went on to an acclaimed coaching career at Division 1 colleges, most notably Purdue, where he was a head coach for 25 years. He was also part of the coaching staff for the U.S. “Dream Team” that won the gold medal at the 2000 Olympic Games. For me, personally, Coach Keady was the first person to tell me that I could be a leader … one day. Flash forward to several months ago. Coach Keady, who is now in his 80s, reached out to reconnect with me. We had about a half-hour phone conversation, and it was great to hear his voice. Suddenly, I was that kid on the court again, with a basketball on my hip, listening to every word Coach Keady had to say. Then, just recently, I received a note and a signed picture—now a treasured memento of yet another coach who helped set a foundation that guided my life. After all, coaches coach.

They believe in us, even before we believe in ourselves. That’s what a good coach does. But more than what they say, it’s how they make us feel. Indeed, the impact of their words and actions lasts a lifetime. 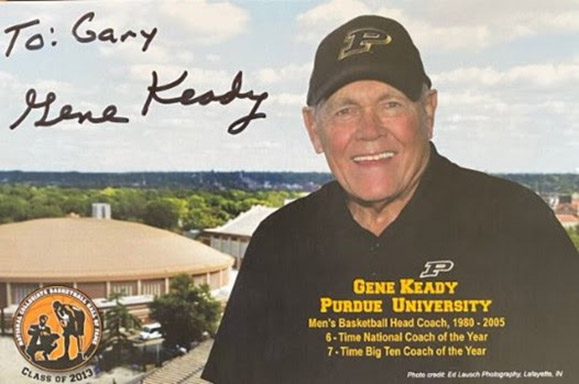