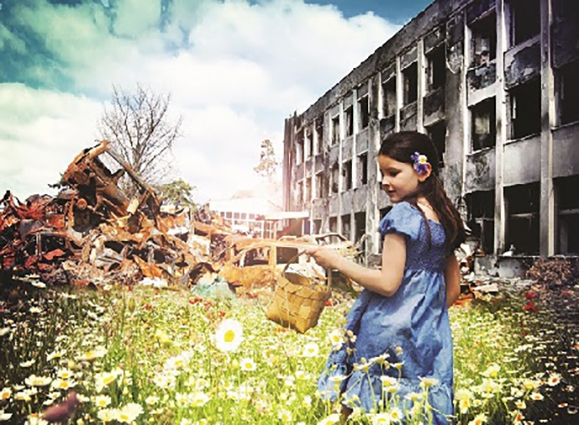 In the depths of the financial crisis and the Great Recession, I started a leadership meeting by showing a picture and asking people what they saw. Most people, with a bias toward optimism, focused on the foreground where a young girl was picking flowers. A smaller number said their focus was drawn to the dilapidated buildings in the background. Only 2 out of 17 said they focused on both.

That’s what I was driving at: while there was hope and optimism (the flowers), pessimism and reality tells us there will always be risks and challenges to overcome (the decayed buildings).

Research tells us that the vast majority of people gravitate toward a good outcome. But that can be a blind spot. Drawing from nearly 70 million assessments of professionals that our firm has conducted, we know that 80% of them have at least one blind spot—a trait or capability that they overestimate. This selective myopia can derail progress.

Our biggest blind spot today is getting stuck in the past, defaulting to the way things used to be. I saw it just recently during our board meeting. Multiple times during our Zoom committee sessions, people kept catching themselves saying, “We’ll discuss that in the full board meeting tomorrow.” Guess what? That “tomorrow” was actually two hours later.

All our sessions were being held in one day via teleconference, but the old way remained etched on our memories (even for me, after 17 years of attending quarterly board meetings). It’s like writing on a white board with a permanent marker. You can spray it and rub it all you want, but that writing will always be there.

It’s not that the past doesn’t matter, it just needs to be brought into the present. My favorite professor in college taught geology—a subject that is about as “old” as you can get. And yet, in every class he brought it alive with passion. The professor had one quirky habit—he was obsessed with writing on the blackboard. He practically consumed chalk. It was amazing to see those clouds of chalk dust migrate from his hands to his clothes to his face and his mouth.... And whenever he said, “metamorphic rock,” a sea of white dust showered the first row of students. While his style was unique to say the least, he brought the past alive, making it relevant in the new world. His passion elevated our discretionary energy.

And that’s what we all must do today. Too much optimism could anchor us in the old—and threaten us with irrelevancy (and maybe extinction). We need healthy pessimism so we can wipe the board, erasing what’s no longer relevant, and give ourselves a clean slate on which to imagine tomorrow.

There are times during the year that are natural resets. Just this past week was the first day of fall. But for me, autumn always started on Labor Day. I can remember as a kid watching the Jerry Lewis MDA Labor Day Telethon, which was oddly mesmerizing, but bittersweet because it marked the end of the summer.

This year, I woke up on the day after Labor Day, feeling bummed out. It wasn’t just the change of seasons. It had been 181 days since the pandemic was officially declared on March 11—and it seemed endless. The problem, however, was that I momentarily locked in the old world—thinking back on how things used to be and wishing they were the same. Going to movies, attending sporting events, traveling…

I quickly snapped out of it. That’s not our reality. We can’t stay in the past, clinging to the hope that things will be back to “normal” soon. We need to wake up to the reality that it’s time to throw out the old and drive to the new.

Ironically, we need pessimism to keep us grounded in today’s reality. Pessimism is that little voice on our shoulders that whispers, “Beware.” Pessimism pushes us to see reality, which actually may allow us to reframe the picture, to then instill hope that we will make tomorrow different and better than today. It all depends on what we see. Here are some thoughts:

Did Leaders Make the Right Decisions?

There is only way leaders should evaluate all the tough decisions they made during the pandemic, according to Korn Ferry CEO Gary Burnison.
Read More
Latest News

In a recent article published by Business Insider, Korn Ferry CEO Gary Burnison explains why it's up to leaders to model a new way forward. Here, we share the steps to become a more radically human leader.
Read More
Sign Up for our 'This Week in Leadership' email