If You Build It, They Will Come

It isn’t a question of if but when certain C-suite duties will be automated. Savvy executives will still be invaluable—if they adapt.

The conversation about technology taking over jobs usually goes only so far as the automation of manufacturing assembly lines, robots stocking warehouse shelves, and perhaps the prospect of digital marketing operations being outsourced to artificial intelligence. But the reach of AI is extending further and faster than many realize or acknowledge, which means it may not be long until those cold, metallic tentacles pry open the gilded gate to the C-suite.

On one hand, the technology is still nascent, which is evident every time your new voice assistant bungles a basic command. But machine learning is rapidly maturing, acquiring the capacity to perform routine office tasks and crunch data at levels of speed and accuracy that humans can never achieve. The upshot will be that executives can then focus on relationships, creative problem-solving, and inventing tomorrow’s technologies.

“Every single C-suite function has sub­processes that can be automated at scale.”

A new breed of companies—like AbstractOps, which launched in 2019—is already aiming to reconfigure management. AbstractOps automates many of the traditional operating-officer duties, including onboarding for new hires, state registrations, employee healthcare, and vendor interactions. It essentially creates a dashboard for all back-office document organization and, when the human touch is needed, lends out its own team members for check-ins. As CEO Hari Raghavan puts it: “We’re allowing executives to focus on their best work by automating the stuff that makes you want to bang your head against the wall.”

Right now, it’s largely early-stage companies that are experimenting with this level of digital takeover. Indeed, for scrappy start-ups and small businesses, this can be a critical cost- and time-saving measure. But even at bigger firms, a number of executive functions are going online—a timeline the pandemic only accelerated. One global study has found that up to 30 percent of traditional C-suite activities could be automated by current technologies. To adapt to these changes, Duke University automation expert Mary Cummings says, “C-suite executives of the future need to be far more technically literate than they are today.” 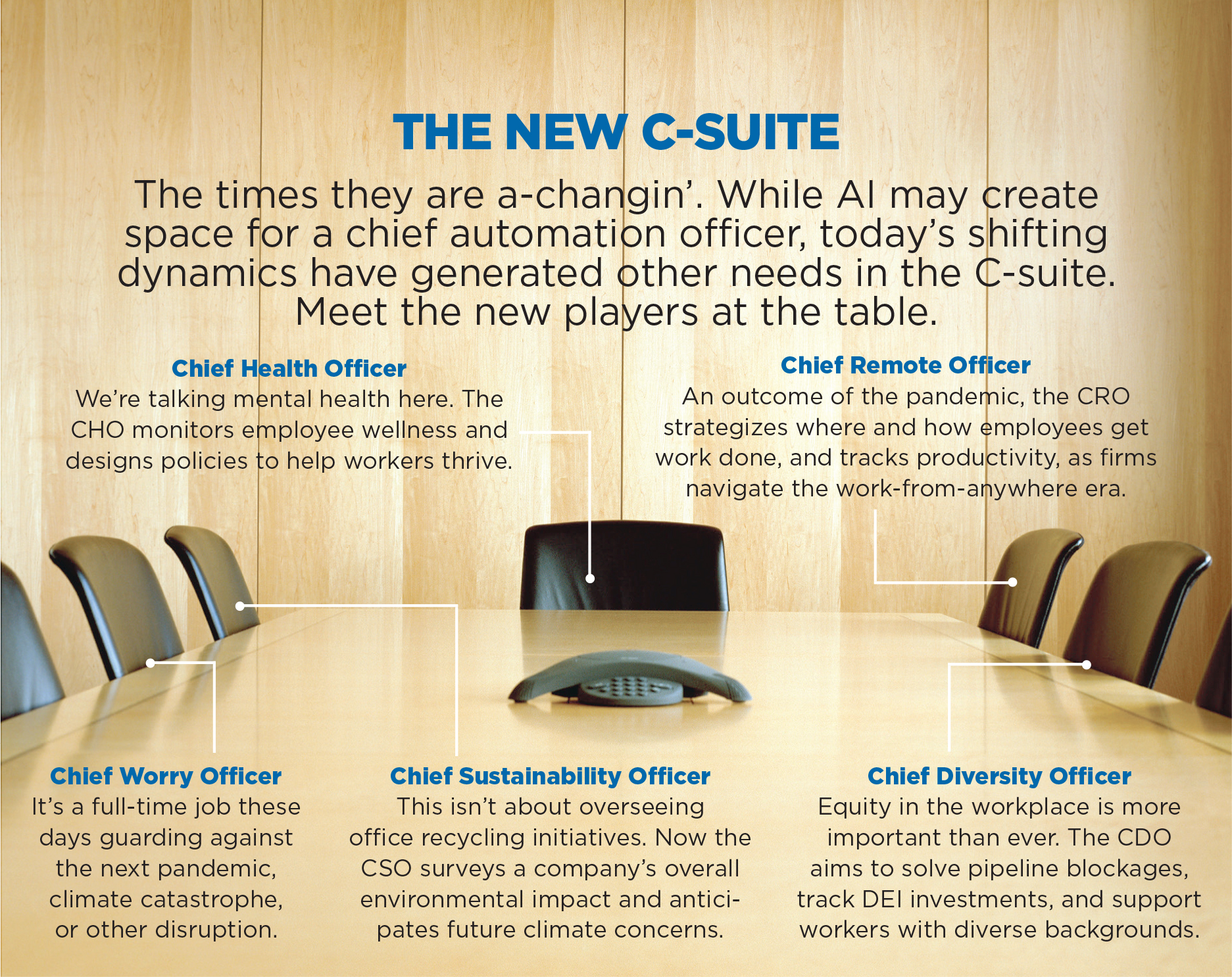 AI could potentially target the HR stack, the finance stack, and (in part) the legal stack. SAP and IBM have both rolled out digital executive decision-making tools. “Every single C-suite function has subprocesses that can be automated at scale, period,” says Esther Colwill, president of global technology industries at Korn Ferry. “What AI really does is disrupt the kinds of work that humans do.” Distributed ledger technology, like blockchain, is already changing how boardrooms operate—and even calling into question their relevance: Is a board really necessary when programs exist to conduct real-time performance audits, ensure regulatory conformance, and forecast financials? Deep Knowledge Ventures, a Hong Kong–based biotech fund, appointed an algorithm to its board of directors to guide investment decisions, and credits it with steering the group away from overhyped projects.

Automation, of course, has limitations. AI struggles to contextualize information, can’t make judgment calls amid uncertainty, and doesn’t yet have humanlike deductive logic. Basically, it’s one thing to have AI fill out routine forms and another to have it solve complex business strategy questions. Because of that, bots won’t eliminate C-suite jobs, says Cummings. If anything, “the more AI you embed in your systems, the more oversight they will need,” she says. Experienced COOs won’t get the boot—but they likely will need to add AI wrangling to their qualifications. After all, even AbstractOps still has a COO on payroll.