In slicing up the corporate profit pie, firms have committed half a trillion dollars to stock buybacks that reward investors. Guess who’s questioning the move?

If there’s one action that defines the traditional function of “creating shareholder value,” it just might be the share buyback. In its basic formula, company executives first count up all the cash the organization has after paying its bills, then decide how to divvy it up. One portion focuses on profitable operations, another on research and development, and another on employee salaries. A good chunk may go toward a merger. But in many cases, the biggest portion is used for the organization to buy its own shares, a move that, all else being equal, increases the value of the shares and makes investors wealthier.

So one would think that after companies in the S&P 500 repurchased nearly $124 billion of their own shares in the first three months of 2021 (the second-most ever in any quarter), and publicly declared their intentions to buy upwards of half a trillion dollars more over the next several months, investors would be saying, “More, please.”

But in the era of ESG, corporate responsibility, employee activism, social protests, and an unprecedented war for talent, a once-fundamental slicing of the corporate pie—a practice dating back decades—is coming under intense scrutiny. A rough measure reveals that among the S&P 500, only about a fifth of excess funding is returned to operations, employee salaries included, with about the same devoted each to mergers and dividends. That leaves more than a third for buybacks, which serve essentially one stakeholder group. In surprising comments to an investor group, Jim O’Neill, the former chairman of Goldman Sachs Asset Management, laid out the issue: “People that run really successful businesses have to be thinking about something a bit more than just an outright obsession with maximization of profit.”

Instead, he said, organizations must consider “their own role in trying to deal with societal challenges.” And apparently, seeing the buybacks, more and more investors too believe that companies may be passing up purpose-driven or environmentally focused projects that, over the long term, would increase overall stock value. Harvard University researchers identified 90 high-sustainability companies that had long-term-oriented, ESG-style policies and 90 low-sustainability firms, then tracked their performance. The high-sustainability firms outperformed by almost 47 percent. That’s particularly eyebrow-raising because many chief financial officers have been saying on earnings calls for more than a year that they embrace the purpose-driven ideals of elevating other stakeholders, such as employees, customers, and the community, to the same level as investors. 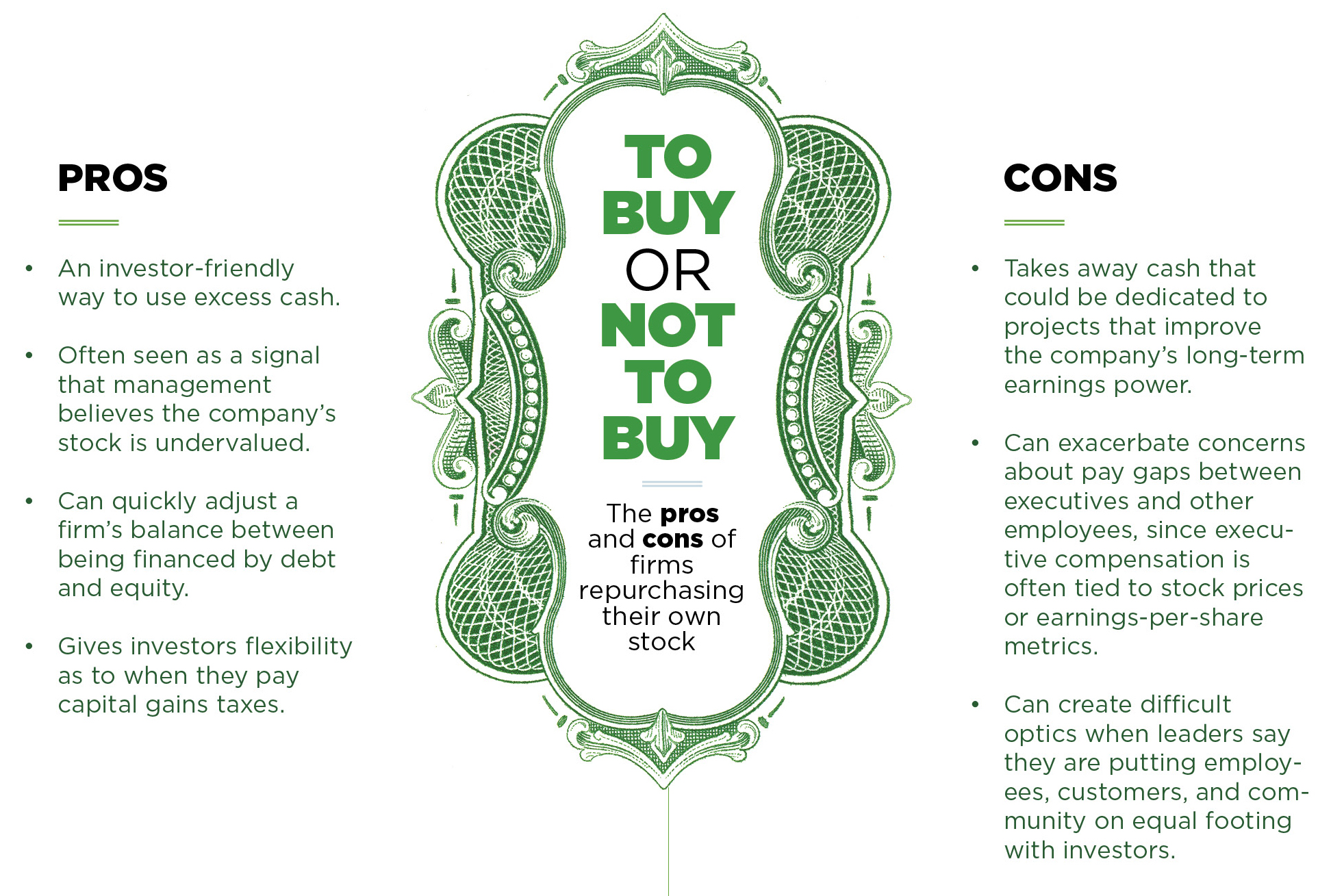 There are certainly some strong reasons for the recent run of buybacks. For one thing, many companies are only reinstating buyback programs that they had suspended during the height of the pandemic crisis. “You had companies who thought they would be in big trouble, and established big reserves, then found they didn’t need them,” says Bob Pozen, a senior lecturer at the MIT Sloan School of Management and former president of Fidelity Investments. Other firms have spent the last several years taking on debt while interest rates were low. Indeed, companies in 2019–2020 spent nearly $2.5 trillion on dividend payouts and stock buybacks but reported only $2.3 trillion in net income—and debt financed the difference, says Howard Silverblatt, senior index analyst at S&P Dow Jones Indeces.

Plus, during the pandemic, some technology and finance firms as well as e-commerce-centric retailers saw their businesses soar so much that there was plenty to spend on multiple stakeholders and groups. Some of the nation’s biggest banks, for instance, were able to raise salaries, shore up digital projects, and spend elsewhere, and have billions left for buybacks.

Still, experts say the timing of the buybacks, if they were to continue at this pace, might create appearance issues, especially with much of the world trying to recover from the COVID-19 pandemic. Also timing-related, buybacks make the most sense when stock prices are low, which has not been the case for the majority of the past two decades. Indeed, between 2004 and 2016, companies reduced their share count by roughly 25 percent but increased their earnings per share by only 12 percent.

All of which only intensifies the pressures on executives to think—and defend—big-pie decisions. As Kate Shattuck, a Korn Ferry senior client partner and coleader of the firm’s Impact Investing practice, says, both the C-suite and board will need to treat this once-routine matter as anything but: “The world has changed.”