Breaking Up Is Hard To Do

Spinning off businesses has become a hot trend in the post-pandemic era. Are the shake-ups worth the risk?

At first, breaking their company into three pieces seemed like a no-brainer for the conglomerate’s executives. After all, the team was always making tough trade-offs to balance the priorities of its disparate businesses, including a fast-growing video-streaming network, a slow-growing coffee producer, and a highly indebted hospital chain. Plus, investors these days love the idea of stand-alone companies free from the bureaucracies of big parent firms.

But the trouble started immediately after the announcement. One of the unspoken truths of corporate breakups is that there is often a war for talent between the legacy organization and the spin-off businesses. Before the transactions were done, executives also had to build whole new financial models for each firm, as well as figure out how to keep track of customer accounts. Then there were the tax implications, both for the firms themselves and for investors getting stakes in the three smaller spin-offs. Even mundane stuff had to be considered: for instance, the conglomerate had a massive contract with a particular maintenance company—a contract that was made null and void by the spin-off. The three firms literally had no idea who would sweep the floors.

Successful or not, corporate spin-offs have been on a huge roll since the pandemic began to ease, with 200 announced or completed last year alone. And it’s not just ordinary-sized firms splitting up—in a single month, three multinationals, each with nearly $200 billion in revenue, announced plans to divide up their various businesses. Observers say a lot of announcements express the pent-up energy of two years of standstill business, when such maneuverings took a back seat to corporate survival. Now, however, experts say spinning off businesses has become contagious in one C-suite after another. “The evidence suggests that shareholder gains in spin-offs are associated with a subsequent increase in firm focus,” says B. Espen Eckbo, a finance professor at Dartmouth College’s Tuck School of Business. Indeed, numerous studies over the last 40 years indicate that spun-out firms outperform the broader stock market over the long term.

But getting to that “everyone wins” situation is a lot harder than it looks on paper, especially with so many unknowns in today’s business climate. Executives of the newly formed spin-off company don’t have established hiring practices, compensation structures, corporate cultures, IT architecture, or much of anything else beyond the financial rationale behind the deal. “All these things are usually done after the fact,” says Juan Pablo González, a Korn Ferry senior client partner and leader of the firm’s Professional Services practice. However, it’s those tactical issues that will separate a good transaction from a bad one.

For one thing, there are a lot of considerations—where is its data stored? who does its accounting?—that a spin-off organization didn’t think twice about when it was part of a big conglomerate, but that it now has to address. A firm that will soon spin off can sign shared-services agreements for human resources, IT, and other corporate features, but those are usually designed to be temporary. There will be plenty of tough negotiations about which specific assets and liabilities go with the new company and which stay with the parent. But the biggest challenge in any spin-off is figuring out who’s working at which firm, both now and in the future, after the firms are broken up. The most immediate task is determining who will lead the spin-off firm and the organization that remains. Among their other concerns, companies don’t want to alienate critical nonexecutive employees. Workers who go to the spin-off firm will want to know that their accumulated benefits go along with them. 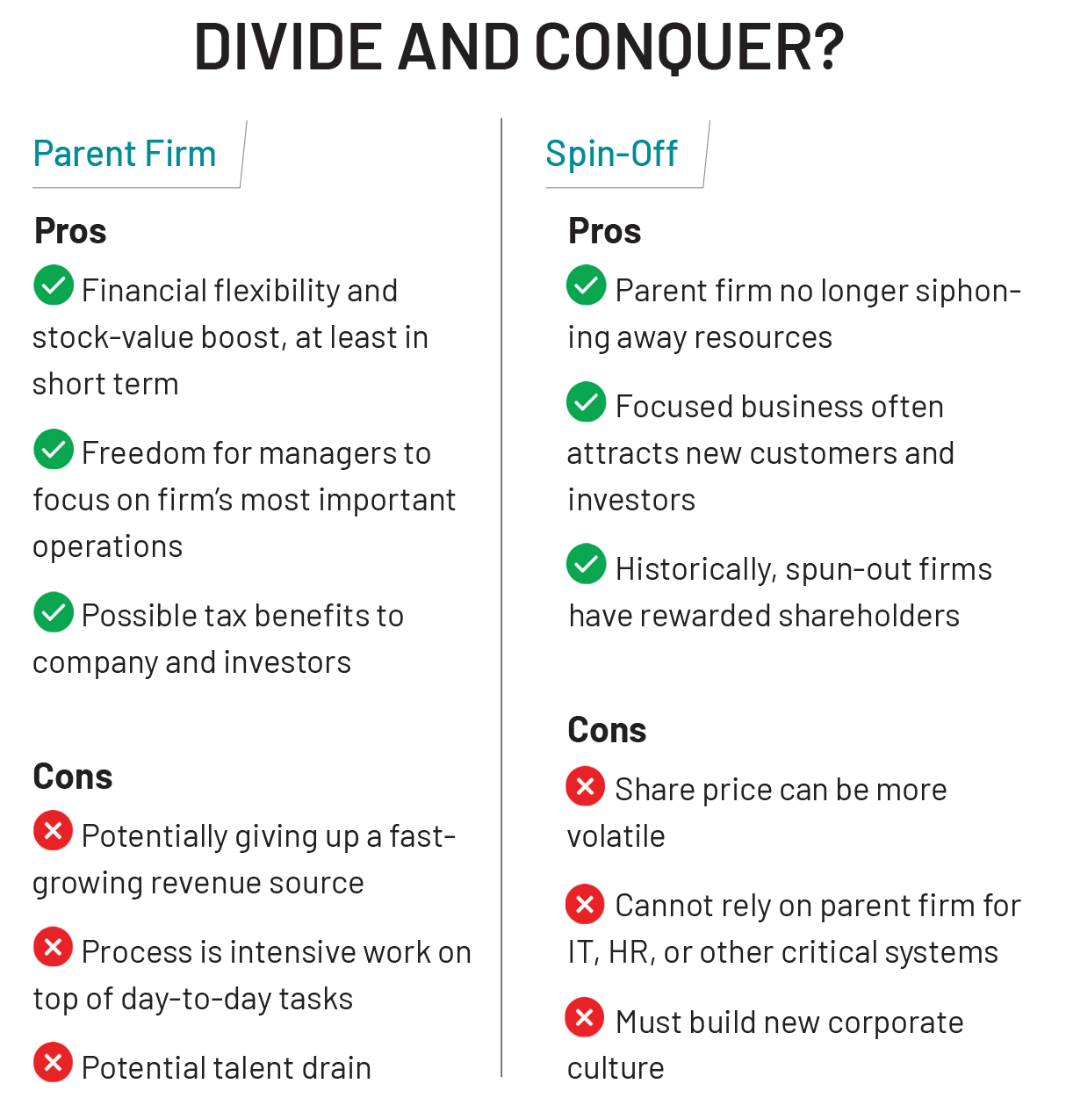 But that’s just for existing employees. The type of person needed for the stand-alone spin-off may be completely different from the one that succeeded at the legacy firm. Executives must define what employee traits, skills, drivers, and experiences will be critical to the spin-off firm’s success. Then the spin-off firm will need to create an employee value proposition—an exercise that touches compensation, statement of purpose, scheduling, communications, and nearly everything else an employee experiences. Much as a salesperson makes their case for a product to a customer, executives will need to create a compelling rationale for both current and future employees.

“One of the hardest parts of most corporate spin-offs is dividing up the firm’s talent correctly.”

All this work should be done, experts say, before the spin-off actually takes place, meaning that executives will be working on it for months even as they’re still running the large existing business. One day, executives are trying to keep the business going. The next, they’re figuring out new strategies for a company that doesn’t yet exist.