Winging It: Why Improv Can Bolster Business

With so much uncertainty today, some firms are tapping into the art of improvisation as a post-pandemic way to inspire innovation.

Before jazz pianist Keith Jarrett took the stage at Montreal’s Maison Symphonique during that city’s 2014 Jazz Festival, the audience of nearly two thousand fans was cautioned to remain seated and avoid making any noise during the performance. This followed an email to all ticket holders warning them about Jarrett’s need for complete silence while he played. The world-renowned musician had a well-earned reputation for temperamental behavior, including walking offstage in midconcert if any audience member snapped a photo, got up to go the restroom, or even coughed loudly.

Though it was easy to dismiss Jarrett as a prima donna, the truth was more complicated. When Jarrett walked onstage and sat down at the piano, he was about to improvise an entire concert. He composed each note in real time and allowed the music to flow from his deep well of creative spontaneity through his fingers to the keyboard. He didn’t rehearse or prepare in advance, and he needed complete silence to achieve the full concentration his unique performance method required. His brilliance had earned him international stardom and, in the opinion of many in the jazz world, the mantle of genius.

“The art of finding creative inspiration in the face of unanticipated change is an admired skill in music, theater, comedy, and sports.”

“I tend to swirl things around,” Jarrett said in a magazine interview. “The problem is if you think about it, you’re wrong. Thinking is very noisy in a situation like that. If I come onstage and I have a thought in my mind that’s musical, that’s like noise, that’s like digital noise. It might seem like a great idea, but I’m locking myself into this noisy place instead of letting the air get swept in some kind of motion towards who knows what.”

Improvisation, the art of finding creative inspiration in the face of unanticipated change, is an admired skill in music, theater, comedy, and sports, and now may well become a widely embraced tool in business and leadership. Executive training courses in improvisation skills have recently proliferated. More than twenty years ago, the Second City, the famed Chicago-based improv comedy troupe, spun off its Second City Works unit to teach executives how to improve business performance through theater and improvisational-comedy techniques.

In a world where short- and long-term strategic planning, data-fueled metrics, and attention to detail are considered de facto baselines for success, the ability to improvise amid the inevitable chaos and shifting landscapes of today’s global economy is no longer an outlying theory; it is a much prized and necessary skill among senior executives. Agility and the ability to find solutions in real time have become table stakes in the leadership game.

As the COVID pandemic enveloped global business with shocking speed, for example, corporate executives as well as small-business owners found themselves needing improvised solutions to their organizations’ mammoth, daunting challenges. Companies had to improvise and repurpose their efforts instantaneously. SpaceX, Elon Musk’s company, started producing face masks. Restaurants, even high-end eateries like Wolfgang Puck’s Spago in Beverly Hills, had to shift to take-out service in order to survive. Luxury-brand conglomerates, meanwhile, turned on a dime to repurpose their brand assets, shifting from making high-end clothing to turning out surgical masks. L’Oréal, for its part, immediately began manufacturing hand sanitizer. Many businesses, unable to pivot, closed their doors.

Improvisation flies in the face of more than a century’s worth of conventional business wisdom. Most companies generate new ideas through what they perceive as standard internal processes and strategies, but these are done with little recognition or understanding of how true creativity emerges and flourishes within an organization.

“The capacity to creatively improvise is an important factor that differentiates successful companies—or teams—from those that are not successful,” writes John Kao, who has taught courses on creativity at Harvard Business School and the MIT Media Lab and is also a jazz pianist, an entrepreneur, and the author of Jamming: The Art and Discipline of Business Creativity. In fact, he and others believe not only that creative improvisation is crucial but that it can also be taught and learned through other improv-based skills, like jazz. If innovation is the current lifeblood of successful companies, archaic business strategies no longer suffice.

“Sheet music doesn’t get us to the new stuff,” Kao said at the 2021 World Economic Forum at Davos. “It doesn’t allow us to unleash ourselves from our preconceptions, our standard operating procedures, our corporate cultures, our set of expectations to get to something new that might be risky but might sound good.”

“At the heart of innovation is improvisation,” says Amiel Kornel, author of Spinning Into Control: Improvising the Sustainable Startup, a 2019 book about the impact of improv on entrepreneurs.

For Kornel, an entrepreneur and business advisor, the book emerged from a lengthy exploration of corporate innovators. Why, more often than not, and despite everyone’s best efforts, do most startups fail? And why do successes seem so random? Despite studiously written business plans and road maps, success often comes from unexpected places. Nothing ever seems to go according to plan.

Kornel broadened his search for answers and began interviewing people in a variety of fields. He spoke to master artisans, an ocean-racing sailor, an urban designer. He researched both contemporary and historical figures, from Genentech founder Robert Swanson to jazz guitarist Django Reinhardt to the fabricator of the original Levi’s blue jeans, Jacob Davis. This varied lot had in common the ability to deal with ambiguity and failure. They managed despite limited resources and isolation, even within corporate settings. Even minor improvisational steps helped pave the way to success. 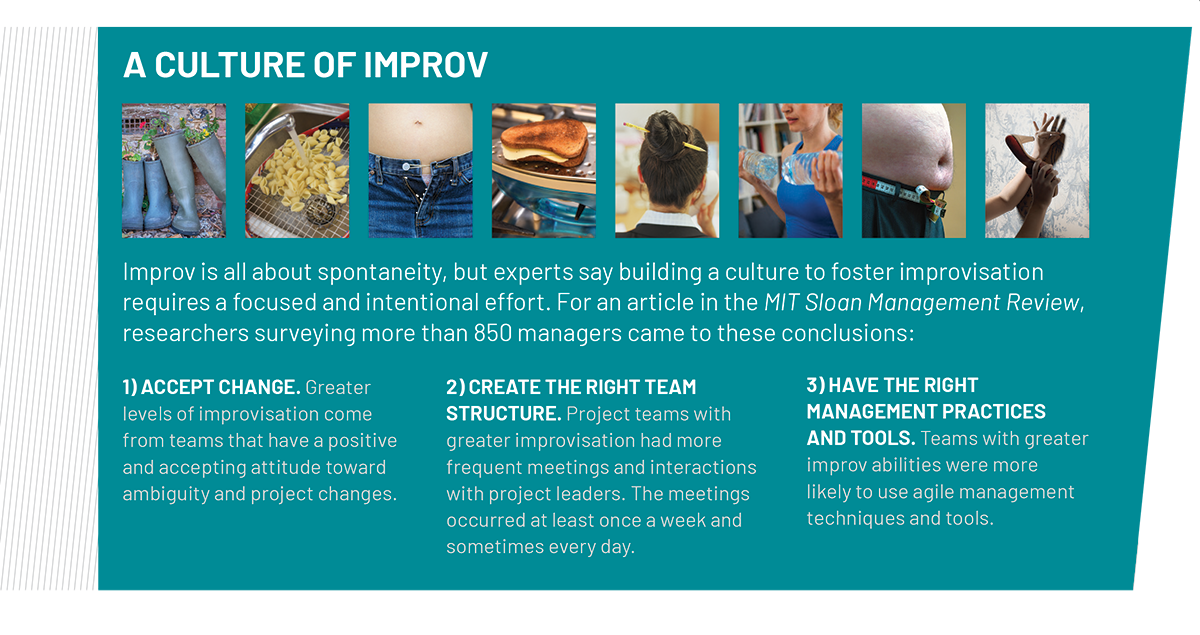 When Polycom, the maker of phone conferencing systems, was in its earliest stages, for example, cofounder Jeffrey Rodman, an electrical engineer who is also a jazz pianist, assembled the first prototype of the now iconic conference phone over a weekend using only cardboard, glue, and a 95-cent RadioShack brochure that helped him solve a critical technical challenge. Polycom was acquired by Plantronics in 2016 for $2 billion.

Michael Dubin studied stand-up comedy before founding the Dollar Shave Club. To jump-start his venture, he cast himself in a humorous, low-budget video describing his then nascent company’s direct-to-consumer proposition. He distributed the video on social media, and it caught the attention of curious early customers and investors. Dollar Shave Club was acquired by Unilever in 2016 for $1 billion.

After collecting these stories, Kornel identified three key characteristics that emerged in common across industries and eras, even among seemingly dissimilar individuals and settings. The three skills at which all excelled were tinkering, wandering, and conversation.

First, Kornel says, “I started hearing more and more about the importance of tinkering with things. I heard about how these people explored resources, tools, and prototypes without a clear view of what you could do with them and what they would do for you. Being good at tinkering was important to these people.” Tinkering creates a dialogue between the entrepreneur and the tools, resources, and prototypes with which they investigate new ideas and concepts.

Next, he saw patterns of wandering, a skill at which most of these successful improvisers excelled. Letting go of assumptions and unlearning past notions and skills frees these entrepreneurs of the tyranny of legacy, Kornel writes in his book. As the old saying goes, when you have no idea where you are going, any road will take you there. Business icons from Henry Ford to Steve Jobs were fixated on success but were willing to go far out of their way and make risky bets in order to reach their goals. “They were wanderers at heart,” Kornel says.

Last, successful improvisers had mastered the art of conversation. Effective leaders are good at listening, observing, and engaging in generative dialogue. “They are not ideologues. They are not debating with people or storytelling,” Kornel explains. “They are engaging with others in meaningful and productive conversation. They are active listeners and very open to being moved by what others had to say.”

“I started hearing more and more about the importance of tinkering with things.”

In the early days of the biotech industry, for example, Robert Swanson, a young MIT graduate and venture capitalist, saw an opportunity in the nascent field of synthesized drugs, such as insulin for diabetics. Gene splicing was gaining buzz in the field of microbiology, and in 1976, Swanson teamed with Herbert Boyer, a researcher at the University of California, San Francisco, to found Genentech, one of the first and most successful biotech firms. The new company offered a promising but uncertain future, and Swanson believed he would have to improvise a new kind of business model.

The company would need the research skills of a traditional pharmaceutical giant combined with the agility of a Silicon Valley high-tech firm. It would also require the deep science emerging from academic research labs. So Swanson’s business model was a mashup of these three different environments, which meant he had to leverage his relationships so that he would not require resources he couldn’t afford.

He encouraged his scientists to keep their academic appointments and to present at conferences. He made sure patents were filed before allowing his researchers to publish papers. He left his scientists a wide-open pathway of exploration and did not dictate what they developed in the lab. When he turned to Kleiner Perkins, the famed venture capital firm, for funding, he delivered a one-page description of what he wanted to do. He reasoned that a long, detailed plan would be relegated to endless meetings and ultimate futility. Genentech emerged as a game-changing biotech giant.

Improvisation underpins all of these skills, Kornel says: “When random is the rule, improvise.” Everybody improvises, he realized; it is something people do naturally, starting in childhood, while playing invented games in the backyard. But not everybody is skillful at improvisation, and therein lies the challenge for business leaders.

Innovators in corporate environments in particular need to intentionally work on their improvisation skills. Improv is not simply shooting from the hip. It is a skill that must be practiced and refined. The legion of famed comic performers who emerged from the Second City—Tina Fey, Alan Alda, Eugene Levy, and Stephen Colbert—spent years working at their craft. Large corporations tend to pay lip service to innovation and creativity, but most actually inhibit improvisation.

“We maintain this mythology about the need to be scientific about our approach to management and innovation,” Kornel says. “In fact, innovation cannot be approached scientifically. It’s a craft, a mix of art and science.”

“In business, we always think that preparation, accuracy, detail, overworking something so we don’t slip up is the way of management. But improv is the way of leadership,” says Kevin Cashman, global leader of Korn Ferry’s CEO and Enterprise Leader Development practice. The content a leader needs is going to be there, he continues, but “the mindset of being open with yourself and others, being inclusive of others, and bringing that together is where all the magic happens.”

Cashman notes that in today’s business world, where uncertainty and unpredictable periods of chaos are inevitable, improvisation skills are crucial for the ability to innovate the new and different. “Business improv is a mindset; it’s a mindset of openness multiplied by inclusiveness,” he says.

Ultimately, corporate leaders require courage to embrace improv as a change agent within their organizations. “Improv without courage means nothing happens,” Cashman says. “We have to be courageous to open up, to share, to be vulnerable, to learn, and to create something great and new and different.”