Micromobility on the Move

The best chance of luring folks back to the office may actually rest on whether cities make room for a host of “last-mile” e-vehicles.

By: Patricia Crisafulli and Pat Commins

We click our double shoulder harnesses, tap our touchscreens, and slowly turn our throttles. Our lightweight electric vehicles—bubble tops, no doors—hum into motion and we begin descending the 700 feet from the top of Skinner Butte to downtown Eugene, Oregon. When we reach the city center, heads turn at the sight of our mini convoy of two: one orange vehicle, one blue and white, with no engine noise, no emissions, and—oh, by the way—three wheels.

Each of us is piloting a “fun utility vehicle’’ (or FUV, also the company’s stock ticker) from Arcimoto, Inc.—one of the latest entrants in a transportation category known as micromobility that’s now attracting attention as a solution to urban problems, from pollution to parking. The FUV, which is decidedly on the macro end of micromobility, can hit top speeds of 75 miles an hour and range more than 100 miles on a single electric charge. Having grown up with cars, like everyone else, we find the steering—​the handlebar grip is also the throttle—a little tricky. And stopping requires a combination of hand and foot brakes. “At the next intersection, let’s try to stop more smoothly,” says Arcimoto’s director of communications, who’s serving as one of our instructors today. Ten minutes later, we’re clipping along at 30 miles per hour.

Our little tour is taking place in the middle of the pandemic—which turns out to be good timing. Scooters, e-bikes, and even electric unicycles have become alternative modes of transportation for urban dwellers seeking to avoid the tight confines of public transportation. From the standpoint of street congestion and parking, cars and cabs are neither environmentally friendly nor practical. For these reasons, micromobility is trying to reinvent the wheel, so to speak, in terms of how people get around, especially in the so-called last mile—trips close to home. As industry analyst Horace Dediu said in a presentation on micromobility, “We don’t know the magic formula for micromobility—nobody does. But the trial and error is what we’re all part of, and perseverance is what we all must provide.”

“It’s a challenge, especially in a very car-centric society.”

The goal is to replace cars—or at least some of them, some of the time. And that requires offering more choices to commuters and other riders. According to Giovanni Circella, director of the 3 Revolutions Future Mobility Program at the University of California, Davis, micromobility is all about having more options for getting from point A to point B. “And when you give more options to travelers, this allows them to adjust their travel patterns and make choices to better fit their needs,” he says.

But this new technology faces a number of obstacles, including concerns about sharing roads with cars and pathways with pedestrians—​not to mention the fact that micromobility is nothing less than a culture shift. “It’s a challenge, especially in a very car-centric society,” adds Circella. In all, it adds up to a bumpy road to acceptance.

The early entrants in this field—bikes and scooters—have been global phenomena for decades. Amsterdam has a long history of residents owning more bicycles than cars, and San Francisco is considered the best biking city in the United States. Almost everybody in Italy, it seems, owns a scooter. But micromobility takes these smaller conveyances in a new direction with the concept of sharing. Docked bicycles for rent first showed up in the U.S. in 2008. Dockless bikes that can be picked up and dropped off anywhere saw their first pilots in 2013. By 2017, fleets of e-scooters were deployed across the U.S. According to National Association of City Transportation Officials data, shared bikes, e-bikes, and scooters accounted for 136 million trips in the United States in 2019, a whopping 60% increase from 2018. Worldwide, micromobility has taken root in cities from Austin to Zurich.

Micromobility enthusiasts point to the explosion in domestic and international e-bike sales—which are expected to top 130 million between 2020 and 2023—as evidence of a revolutionary move towards smaller forms of alternative transportation. They also believe that the shift in modes of transportation brought about by the pandemic, which was a boon for urban cycling, may become permanent.

But that’s also where some of the headaches are arising, from clashes with pedestrians to scooters abandoned on sidewalks. In some places, scooters have been banned outright. According to one study, injuries from e-scooters, e-bikes, and similar devices accounted for nearly 200,000 ER visits in the U.S. during the past four years. A statewide study in Texas, for example, found that the e-scooter injury rate per mile traveled was approximately 175 to 200 times higher than for motor vehicles. While those numbers seem daunting, the micromobility experts we spoke to stressed that closer collaboration with cities can help improve safety. Among the measures they recommend are dedicated infrastructure for scooter parking, such as corralled areas, and expanded bicycle lanes that can also be used by e-scooters.

"We don’t know the magic formula for micromobility—nobody does."

Another boost for micromobility comes from large cities seeking to tackle pollution. Paris, for example, hopes to ban diesel cars in 2024 and gasoline-powered cars in 2030. That has opened the door for both moped sharing and bike sharing. While other cities may not be as stringent, interest in vehicle alternatives is clearly increasing, part of a broader trend toward greener transportation. In fact, improving accessibility and reducing both congestion and emissions are among the biggest arguments that micromobility companies make to city leaders when seeking approval for e-scooter and e-bike sharing programs. This was enough to convince the city of Chicago to launch an e-scooter pilot designed to close the transportation gap for lower-income residents. Deirdre Oakley, a professor of sociology affiliated with the Urban Studies Institute at Georgia State University, believes that integrating micromobility with public transportation can benefit underserved neighborhoods.

As an example, Oakley cites a person who lives far away from a bus stop or must ride two or three buses to get to work. “For them, being able to take an e-device part of the way to catch a bus could help with first- and last-mile issues,” she says. Increasing low-income ridership won’t happen, though, unless e-bikes and e-scooters are made widely available—and not just in areas frequented by tourists or more affluent city residents. “If you make micromobility solutions accessible for everyone, especially those dependent on public transportation, you are making the city run more smoothly and cleanly,” she adds.

Micromobility could even help connect underserved neighborhoods to parts of the city from which they’re cut off, enabling people to move more freely and equitably. “It has to be about helping a community flourish,” says Phil Jones, senior government relations director for Lime, which is one of three e-scooter companies—along with Bird and VeoRide—providing 1,000 e-scooters each in a pilot program in the Bronx.

In the end, most observers believe, it will be advancements in technology and better safety that increase adoption of these vehicles. Some cities, for example, already require riders to wear helmets; others may decide to create additional protected bicycle lanes to keep scooters and bikes out of the way of cars. Increasing availability of e-bikes and e-scooters will be important as well, using advanced technology such as the Internet of Things (IoT)—the interconnected network of smart devices—for fleet management. Ben Forgan, CEO and cofounder of Chicago-based Hologram, a global cellular platform for IoT, tells us, “A key to the success of micromobility is technology to manage fleets using IoT connectivity, ensuring that these devices are where they are supposed to be and in working order.” Using IoT to keep track of e-scooters could further improve safety and eliminate the nuisance of devices getting left on sidewalks.

As micromobility grows, it’s also moving out of its lane with new solutions. That brings us back to Arcimoto’s FUV, which—as a larger vehicle that uses streets and even highways—is an outlier. Resembling a cross between a motorcycle and one of those tuk-tuk delivery vehicles in Asia, an FUV is definitely not a car. Unlike an SUV, it carries only one or two passengers (which is the point, since most cars on the road carry the same number). Similarly, Arcimoto’s commercial model—the three-wheeled electric Deliverator—would fit inside one of those ubiquitous delivery vans that lumber around cities. But the Deliverator can carry 350 pounds and has about 20 cubic feet of cargo space, which makes it suitable for most first-mile and last-mile deliveries. There’s even a flatbed model. “We have a very adaptable, flexible platform that can be made bespoke for a lot of different verticals within the transportation space,” Arcimoto CEO and founder Mark Frohnmayer tells us. 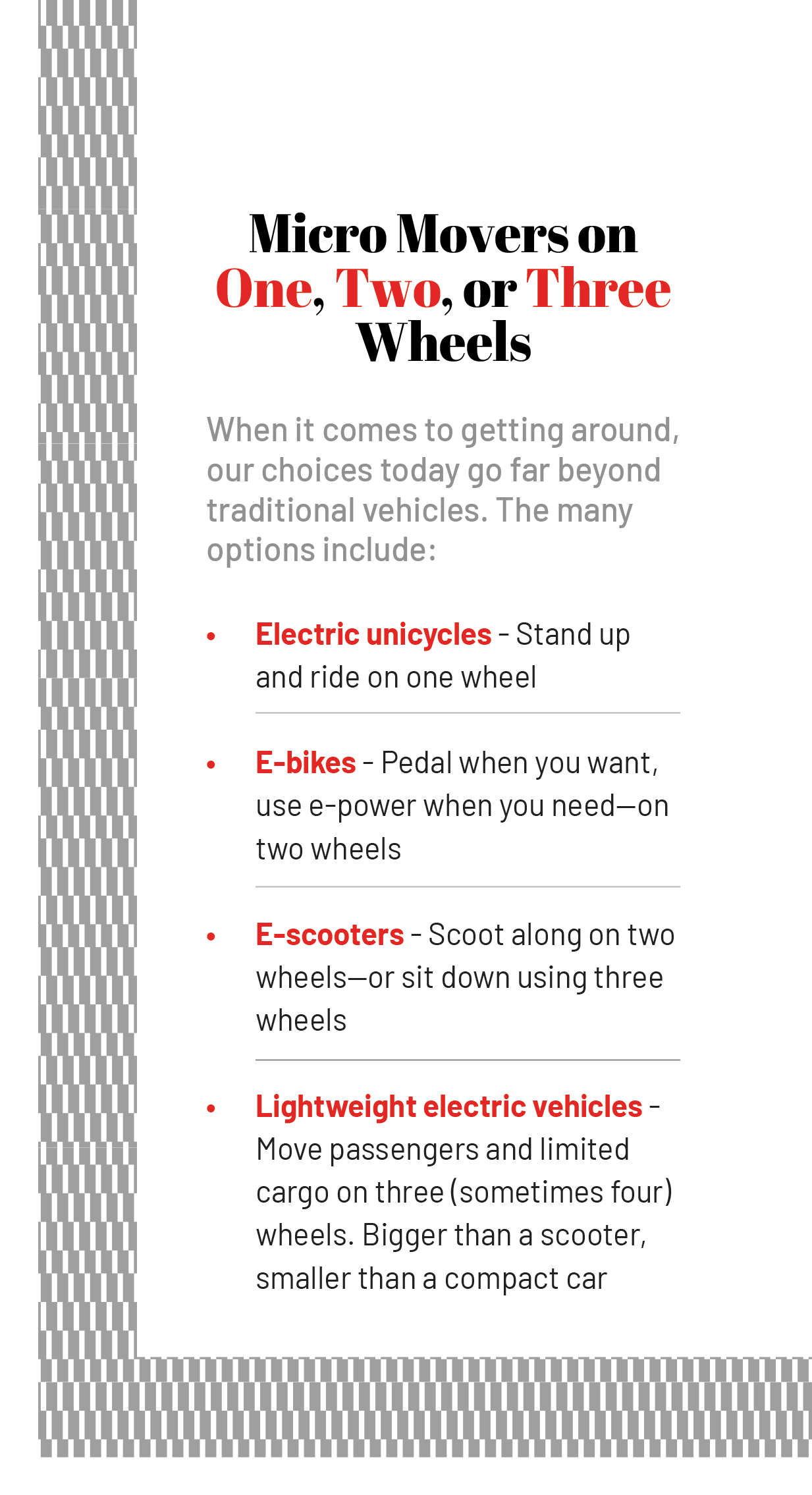 Arcimoto’s FUVs are still in preproduction, but the company has fielded preorders from all 50 states and from countries around the world. (Celebrity alert: Actor Mark Wahlberg, who reportedly was among the first to test-drive an FUV, bought a custom model in 2020.) In addition, FUVs are being deployed as ride-sharing fleets for rentals in tourist destinations such as Key West and San Diego, as well as in Eugene, where Arcimoto is based. And the Deliverator is currently being pilot tested by some big-name delivery companies. “We have really focused on getting as many butts in seats as we possibly can to build a foundation for mass production,” Frohnmayer says.

More squarely in the traditional micromobility space is Arcimoto’s newest product line, still under development. Frohnmayer calls it “the next order of magnitude of weight reduction, cost reduction, energy efficiency … a kind of electric-bike, electric-scooter class of product.” Whatever the new product is, it will meet with plenty of competition from the likes of California-based e-scooter companies such as Lime, Bird, and Spin, the last of which was acquired in 2018 by Ford Motor Company as its micromobility subsidiary. Honda, another automaker, plans to launch an e-scooter in China that features a seat and hydraulic brakes. And there are plenty of others in the States and internationally.

These companies clearly see an open road for more types of vehicles. “It could be a possibility,” Circella says, “and a lot of providers are betting on that.”