It's easy now to get lost and exhausted in all of the world's ambiguity. Korn Ferry CEO Gary Burnison offers advice about how to see things as they really are.

…If you think your life is complete confusion
Because your neighbors got it made
Just remember that it's a grand illusion
And deep inside we're all the same…
- “The Grand Illusion,” by Styx

I learned that lesson on a long-ago Halloween when I was growing up. We weren’t poor, we just didn’t have any money … so I never wanted the other kids to see the reality of where I lived. We were that place—with the lights out and the “nobody’s home” look that made people move on. Instead, I wanted the “grand illusion.” When I went to other neighborhoods with friends for trick-or-treating, I gravitated toward my vision of Halloween utopia—imagining what it would be like to live in a nicer house with carved jack-o’-lanterns on the front steps and where people handed out lots of candy. Eventually, I learned that we all need to look beyond the mirror—and our disguises.

When we were young, Halloween was all about disguises, illusions, frightfulness…then smiles and laughter. Over the last few months, we’ve seen a lot of the former and too little of the latter.

Every day feels like Halloween now—after all, we’re wearing masks. But these aren’t the only disguises. We are fatigued. Fed up. Things are getting better, then they’re getting worse. We take a step forward, then seem to slide back.

To keep moving up and to the right, we have to continually refocus our lens—especially at our own circumstances, as this well-known illustration by M.C. Escher shows us. 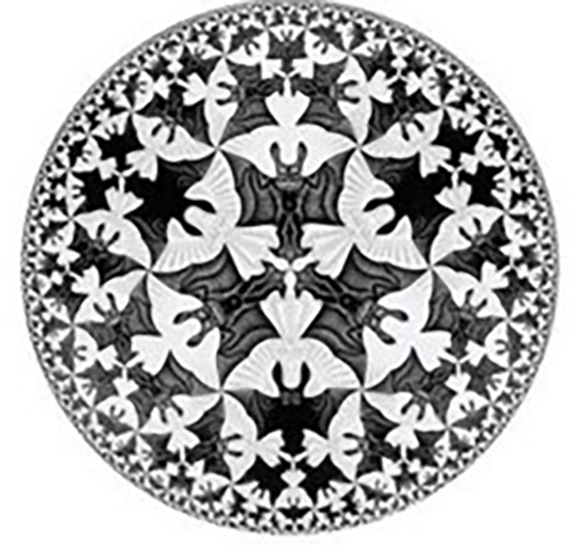 When you look at it, do the bats jump out at you? Or do your eyes keep searching for the gentler, happier images of the angels?

When looking strictly at the numbers, we see the bats—we are no better off than we were nearly eight months ago. But there are angels—our mindset has shifted. We are moving along the Emotion Curve and actually integrating this surreal experience as part of our reality.

In California, for example, the state’s department of public health has issued guidelines for private gatherings: must held be outside; no more than three households gathered; masks are to be worn; two hours or less; and singing, chanting, and shouting are “strongly discouraged.” As we head toward Thanksgiving gatherings, who would have imagined such rules a year ago? You can’t make this up.

Discouraging, yes. But there are signs of progress. We need to look for them, wherever they are—no matter how small they are—to motivate others.

It’s like those hash marks on the doorjamb. Over the years, I’ve recorded the progress of my children as they topped three feet, four feet, five feet, and beyond. These markings remind us that growth—whether a child’s or an organization’s—never progresses at an even pace. Spurts are interspersed with modest gains. It takes perspective, over time, to see how far we’ve come.

It’s not always easy to see. Based on assessments of millions of executives, we’ve found that 90% of the problems they face are ambiguous. With greater responsibility comes even more ambiguity in all its forms: uncertainty, obscurity, vagueness, doubt, and enigma.

Instead of running from ambiguity—avoiding the illusion—we need to embrace it. Here are some thoughts:

·  Coming out of the fog. When we’re lost in ambiguity, our perceptions are skewed—and we can get locked into false impressions and faulty assumptions that keep us from seeing and appreciating others. If we’re not aware, our first impressions can lead to judgments about someone that prove to be entirely wrong. Mark Arian, CEO of our Consulting business, remembers being a 12-year-old with a paper route and dealing with customers who complained if he didn’t place their newspapers exactly where they wanted them. One woman in particular was always calling his boss and getting Mark in trouble. No wonder he was skittish on Halloween when he went trick-or-treating with his younger brother and sister. Even being dressed as a zombie didn’t give him courage as he approached a big house where this picky customer lived. “With mixed feelings, I rang the bell,” Mark told me this week. “Then the woman who lived there came to the door in a wheelchair. She was overjoyed to see us kids.” Seeing her huge smile and the candy in her hands was the biggest eye-opener of Mark’s young life—and in that moment of empathy he knew exactly why this customer needed her newspaper delivered to a certain place so she could retrieve it easily. Sometimes our most uncomfortable moments unmask our faulty assumptions and lead to personal growth. The pandemic is one such moment.

·  Facing the monsters. There was nothing scarier about Halloween than going it alone. Safety is always in numbers—that’s the power of teams. One Halloween a few years ago, my youngest daughter, Olivia, and I crept along a shadowy wall covered with ivy. Then, suddenly, a monster jumped out at us. Olivia screamed, setting off a chain reaction among all her friends. It was “Halloween Horror Nights” at Universal Studios where people in elaborate camouflage did a great job of scaring the daylights out of us—kids and parents alike. When something unsettling happens, our first reaction is naturally to look around at others for affirmation of how we should feel. All it takes is one person with a brave face—or someone shaking in their shoes. “Human beings are social animals. We look for safety by connecting with others to create reassurance,” Janet Feldman, a senior client partner in our firm’s CEO Succession practice, told me this week. “As individuals, we are vulnerable to threats. But with others we feel courage.” The first rule in any leadership journey is never walk alone. When we travel with others, we find comfort—and courage. Together, we rise above.

·  Unmasking the illusion. I can’t tell you how many times during this pandemic people have confided in me their feelings and frustrations, doubts and denial. We are all trying to get through this. More than ever, we need each other to break free of the illusion and see things as they really are—and, more importantly, what they are to become. We long to have people around us, to be resilient. Instead of looking for the light at the end of the tunnel, we need to be that light.

If we’re being honest, there are days when we all wish we could cast a spell, wave a wand, and turn things back to the way they used to be. But that’s the biggest illusion of all. Indeed, the end of the grand illusion is recognizing the spell we’re under.