Dirt Wars: The Battle to Save the Soil

The sustainability movement has moved to a new arena: farmland. How parking the plow may help save the world.

By Patricia Crisafulli and Pat Commins

Zeb Winslow III, a fifth-generation farmer in northeastern North Carolina, had already convinced his father that they should plant multiple cover crops—rye, clover, triticale, vetch, and tillage radish—on a 40-acre test plot at their 750-acre farm to protect the soil. But when the younger Winslow wanted to take things a step further—leaving those cover crops in place and planting corn and soybeans right in the middle of them—his father protested. “You’ve lost your mind,” his father told him. “It won’t work.”

That was 2014, and the younger Winslow didn’t give up. Seven crop seasons later, the Winslows have adopted several practices to improve soil health, including planting cover crops to retain moisture, control weeds, and increase fertility, and no-till farming to prevent erosion and increase retention of both water and organic matter. “I have a different relationship with our soil now,” Winslow tells us. “It looks different, smells different, feels different, and reacts differently, especially after a rain.”

From the Nebraska cornfields to the Georgia cotton fields, and even the vineyards of the Pacific Northwest, a revolution is occurring in agriculture—and it is taking place right at ground level. A growing number of farmers are moving beyond merely saving soil to actually renewing its growth potential and health, in a practice known as soil regeneration. In doing so, they seek to reverse the damage caused by decades of traditional techniques—heavy tillage, planting the same crops year after year (known as monoculture farming), and ample use of chemical fertilizers and pesticides—that leached life out of the ground.

The movement, which brings together science and sustainability, has already picked up a wide range of backing outside of farming; more than two dozen states are debating healthy-soil bills, and major fashion firms have committed to fabrics tied to regenerative farming. There is even some celebrity backing, with the likes of Woody Harrelson and Rosario Dawson pointing to such lofty goals as improving the world’s food supply and slowing climate change. All of which suggests that sustainability is continuing to take hold in ways no business leader can ignore.

But even with all this momentum, farmers themselves are far from united. No-till farming, which leaves the roots of the previous year’s crop in place to anchor the soil and increase organic matter, is used on only 37 percent of the total US crop acreage. Cover crops that act as a shield to prevent soil loss while promoting healthy microbes are planted on a mere 5 percent of the total land. Adding compost to build the soil occurs on an even smaller fraction of acreage. “Most of our farmer mentors would say, ‘start small,’” says Dianna Bagnall, a research soil scientist with the Soil Health Institute.

Part of the problem is the soil itself. Across the nearly 900 million acres of cropland, pastures, and rangeland in the United States, there are some 10,000 different types of soil. It is sandy in some places and volcanic in others; drier here, marshier there. Mineral content, carbon content, microbes, how it holds water—all that and more give soils different compositions, textures, and even colors. As Erin Fitzgerald, CEO of US Farmers and Ranchers in Action (which brings together some the nation’s biggest agriculture organizations and firms), puts it, “If you ask a farmer about their soil, you are going to be there for a while—it’s that complicated.”

That complication means there is no single solution for all. Soil regeneration practices must be tailored for crops, climate, and conditions, and it takes experimentation to get them right. The question is whether the movement can break farmers’ resistance—since for many who have been planting and harvesting the same way for generations, an unplowed field will always seem flawed. “There are going to be some folks out there that we can’t convince,” Bagnall says.

David Montgomery, a geomorphologist at the University of Washington, had studied rocks and landforms his entire career until he took a closer look at his own backyard. In 2000, his wife, biologist Anne Biklé, was digging a new garden at their Seattle home. Under a tangled mat of lawn lay khaki-colored soil with not a worm to be found. They could see what was missing in their soil: “the biology part,” Montgomery says, referring to the organic matter that makes for rich, dark earth and the microbes that flourish in it. Montgomery and Biklé started to compost, and years later the result bloomed.

In the process, Montgomery shifted his thinking about soil from “what covered up rocks” to viewing it as a living ecosystem. Healthy soil is a mix of mineral matter (think ground-up rocks) and the biology of both living and dead organisms within it. “It’s the living skin of the earth,” adds Montgomery, who went on to write about it in Dirt: The Erosion of Civilizations and with Biklé in The Hidden Half of Nature. Healthy soil teems with life—but without protection, that life is lost. The cost of doing nothing is summed up in a dire prediction from December 2014, when Maria Helena Semedo of the United Nations’ Food and Agriculture Organization declared that roughly one-third of the world’s arable soil had already been lost. Given that it takes a whopping 1,000 years to generate a meager three centimeters of topsoil, Semedo predicted that at the then-current rate of soil degradation, the world would lose all its fertile land within 60 years.

Certainly, not everyone agrees with the severity of that prediction. But the world has already seen what happens when soil is ignored: the Dust Bowl of the 1930s, which resulted from drought, loss of native grasslands, and soil depletion from planting the same crops over and over. More than 75 percent of the topsoil was lost in some regions by the end of the decade, and approximately 3.5 million people left the Plains states between 1930 and 1940.

In the US, that led to the creation of federal and state agencies to promote soil conservation. But to those on the front lines of this new movement, conservation isn’t enough—fertile soil needs to be rebuilt. “The word ‘regenerative’ really captures that we don’t just want to hang on by our fingernails to the system that we’ve created,” Bagnall says. 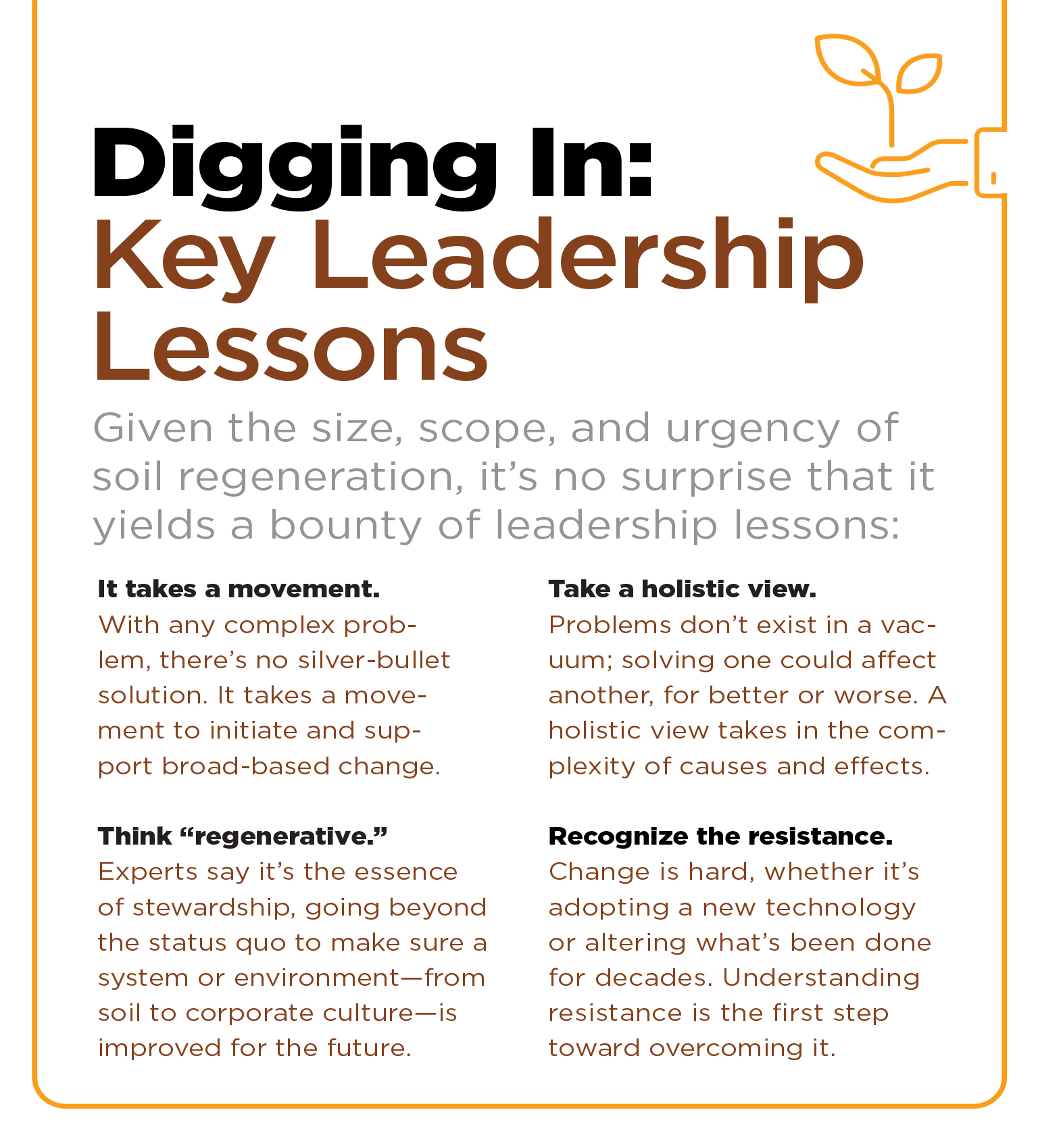 Regenerative practices, however, have met with resistance because farmers have to change what they’ve done for generations. Indeed, the furrows of plowed fields go back some 8,000 years. Tilling leaves an expanse of soil—like a fresh canvas—ready to be planted. In the eyes of some farmers today, practices such as no-till farming just don’t look right. Bagnall shares a story about two Texas cotton farmers, one who adopted no-till and a neighbor who criticized the way those fields looked. Even when the no-till field produced a plentiful crop, the neighbor remained unconvinced: “You got the prettiest cotton around here, but just imagine what it would be like if you would have plowed the field.” 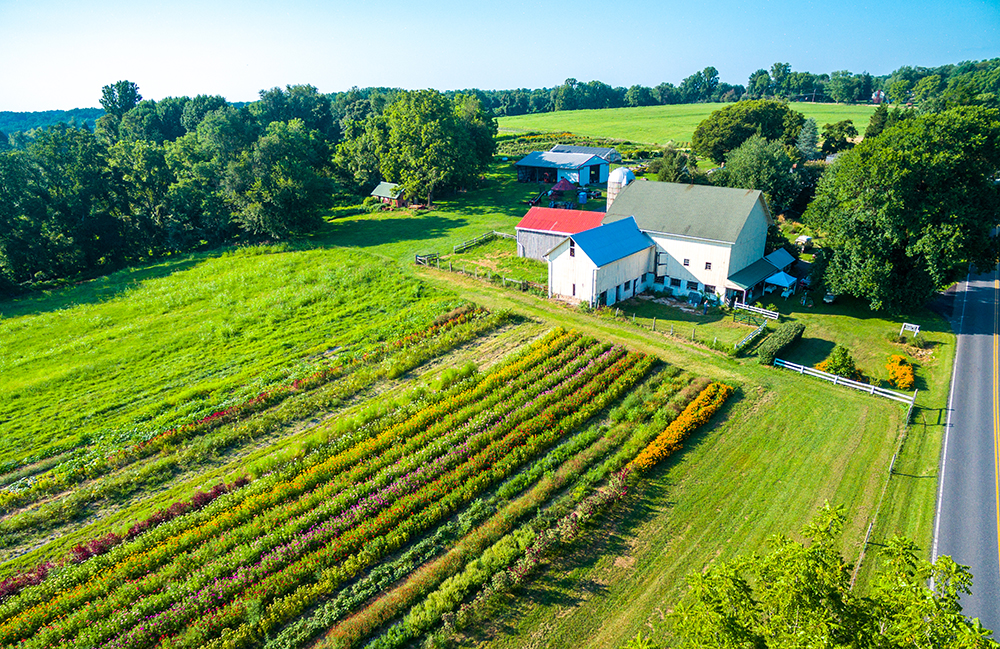 Not surprisingly, education and communication are big parts of the regeneration campaign. At Rexius, a company in Oregon that operates an industrial compost facility, sales manager Jordan Lauch spends his day telling farmers, landscapers, and homeowners about the benefits of compost and other organic material for revitalizing their soil, but he admits it can be a tough sell. He cites the example of spreading lime, made from crushed limestone, on a field to lower the acidity of the soil. “It’s very easy math to quantify the amount of lime,” he says. With compost that’s delivered by the truckload, however, it isn’t a straight one-for-one match. As he goes into fields, Lauch tries to help growers understand both soil health and environmental benefits, and figure out what could work for them “so their plants are healthier from the seed-starting stage, through the vegetative stage and the blooming stage.”

Experts like Bagnall prefer to look at broad outcomes of soil health: better fertility and productivity, the potential for improved profitability for farmers, and higher water quality.

The crown jewel is the possibility of net-zero carbon neutrality in agriculture by 2040 (currently it accounts for 10 percent of total US emissions). But that’s not all. Experts believe that healthy agricultural land can become a carbon sink for reducing greenhouse gases. (Grass, for example, is a huge sponge for absorbing carbon dioxide.) Regenerative practices such as no-till farming, cover crops, and crop rotation that improve soil health also, it seems, help keep carbon locked in the ground. According to the latest projections, that could move the needle from +10 percent emissions from agriculture past net zero down to −4 percent.

These days, when Zeb Winslow is out in his fields where he and his father grow corn, cotton, soybeans, and some small grains, he notices the differences. There is more life in the soil—earthworms and helpful bugs that break down the crop residue. Those insects, in turn, attract birds. It has taken seven years, but crop yields have held steady, while the use of herbicides to control weeds has been reduced by “quite a bit,” and pesticide use is down most years. Water management is also improved, which is important since only a portion of the acreage has an irrigation system. Winslow adds: “I spend a lot more time listening to my farm.”