A remarkable change in hiring is taking place as firms realize that remote work eliminates geographical boundaries. But science says managers may never be able to “read” candidates correctly on video.
Download PDF

The firm thought hiring new talent this year would be a piece of cake. All the logistical boxes were checked—job listing posted, recruitment strategy finalized, interview panel convened. But after two weeks of reviewing local resumes, the head of human resources couldn’t find the right candidate. And with lockdown orders triggered by the spread of the novel coronavirus, the firm had no way of flying anyone in. Stuck between a rock and a hard place, the HR leader felt hopeless.

For as long as memory serves, hiring has been about geographical proximity. Companies like this one would limit their searches to a local slate of talent, plucking the best of the best from a 25-mile radius. And if the best of the best weren’t so close, they would foot the bill so their choice candidates could interview in person, offering perhaps both a nice hotel stay and a competitive salary.

But a growing chorus of experts say COVID-19 hasn’t only impacted the way work gets done or how positions are filled in the short term, when physical contact is severely restricted. It’s also completely changing the hiring landscape, wiping out decades of ingrained systems. Indeed, as the pandemic has shattered the taboo over remote work, so too will it open up the idea of hiring candidates from afar, with no face-to-face meetings. Now, the right person from nearly anywhere on the planet is eligible and need never attend an interview or meet their colleagues. “For so long, talent acquisition has been about what’s feasible,” says Melissa Swift, global leader of Korn Ferry’s Workforce Transformation practice. “It’s about opening the aperture and looking at what’s possible.”

This sudden widening of the talent pool is perhaps the greatest shift the recruiting field has ever seen. But as with many game changers in business, there’s a rather critical curveball, and one that threatens to cause a lot of bad hiring, costing firms dearly not only in rehiring and retraining but also in relaunching strategies. This glaring constraint: virtual interaction. Eye contact, body language, facial cues—all of these forms of nonverbal communication are important to building rapport, experts say. Since the beginning of humankind, these have been formed in person, where our brains are wired to see and translate people’s expressions, tone of voice, and mannerisms. Literally every book on interviewer techniques takes all this into account.

But now what? Science says that trying to “read” candidates through online interaction is still an enormous challenge for managers, no matter what technology is created. “Technology, at this point, isn’t good enough to actually have genuine contact,” says Rosanna Guadagno, director of the Information Warfare Working Group at Stanford University’s Center for International Security and Cooperation. 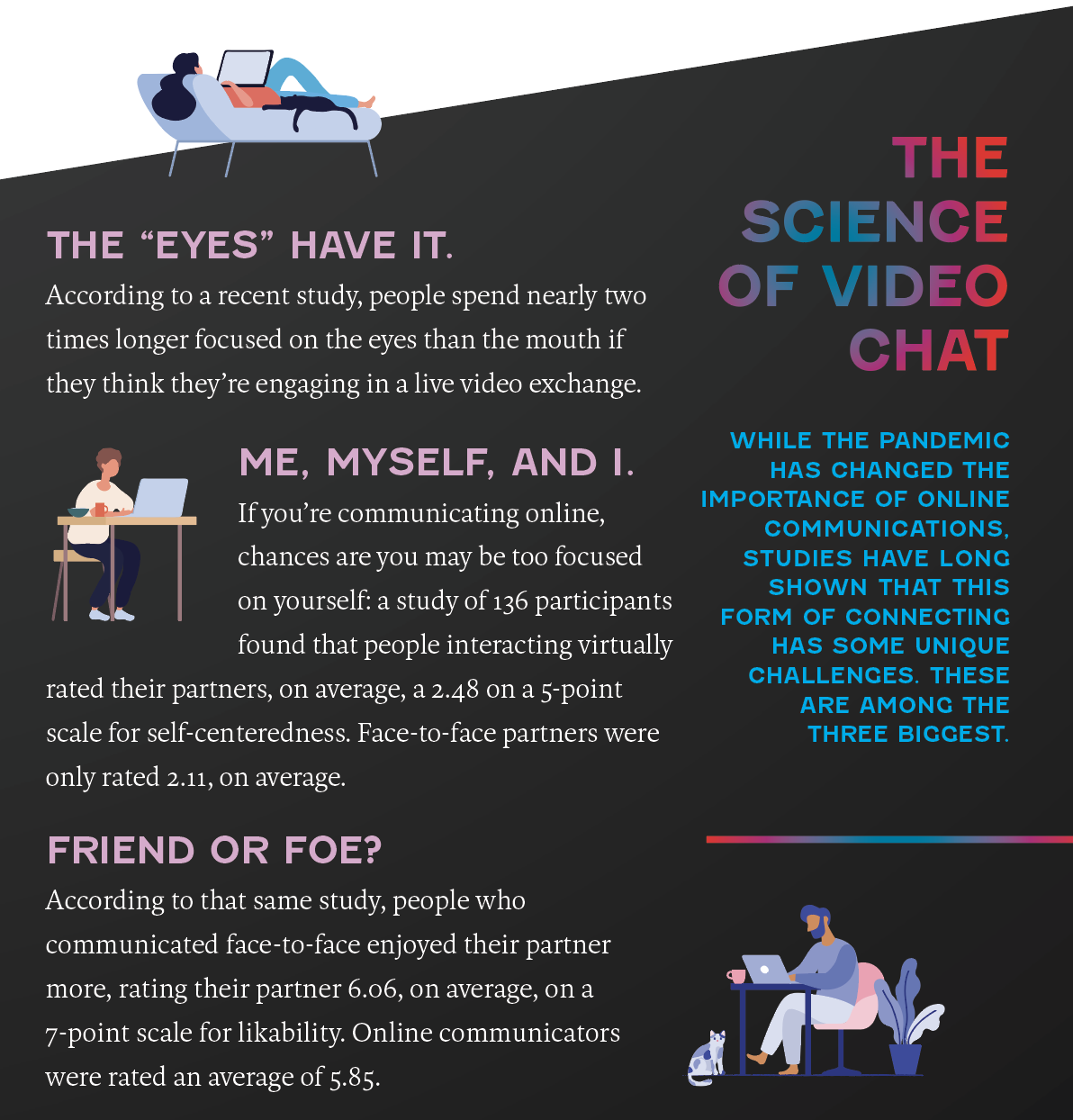 Nearly a decade ago, Guadagno and a team of researchers set out to settle a debate: whether or not people could form accurate first impressions of others through online interactions, compared to face-to-face ones. One body of research claimed yes; another argued not so much.

According to Guadagno’s study, which compared the quality of face-to-face versus online interactions among 136 people, the reality is a bit more nuanced, but ultimately, in-person interactions reign supreme. Her research showed that although participants considered online contact easier to maintain, they found in-person interactions to be more enjoyable. This is not surprising, given the science: actions like mutual gaze or shaking hands increase the release of oxytocin, aka the cuddle hormone. This rush of oxytocin, in turn, promotes bonding and trust among people. With face-to-face, “there is a level of richness to the interactions,” she says.

But experts say those actions become lost across the digital divide. It’s more difficult to, say, maintain eye contact through a webcam or pick up on subtle nonverbal cues that may reveal hidden emotional information. As a result, hiring managers may have a trickier time forming connections with candidates during remote interviews. “There is going to be a stiltedness that we will need to find ways to work around,” says Evelyn Orr, senior vice president, COO, and head of research at the Korn Ferry Institute, Korn Ferry’s research arm.

Yet it’s not just compromised eye contact or lack of attention that hamstrings communication in the virtual world. Research has also found that people online are more likely to focus on themselves; the lack of immediate, physical proximity means people can treat the digital divide as a buffer, concentrating more on what they’re doing without anyone noticing the way they might face-to-face. So on video calls, people might swivel in their chair, check their smart watch, stare at their cellphone. There is a tendency to lose those so-called standards of politeness because “they don’t have that sense that you’re observing their behaviors,” says Elan Barenholtz, an associate psychology professor at Florida Atlantic University. His own research found that participants spent more time fixated on the eyes—nearly two times longer, that is—when they thought the video exchange was happening in real time, but paid more attention to the mouth when they believed the conversation was prerecorded. Virtual communication, in his view, creates a feeling of “social invisibility.” 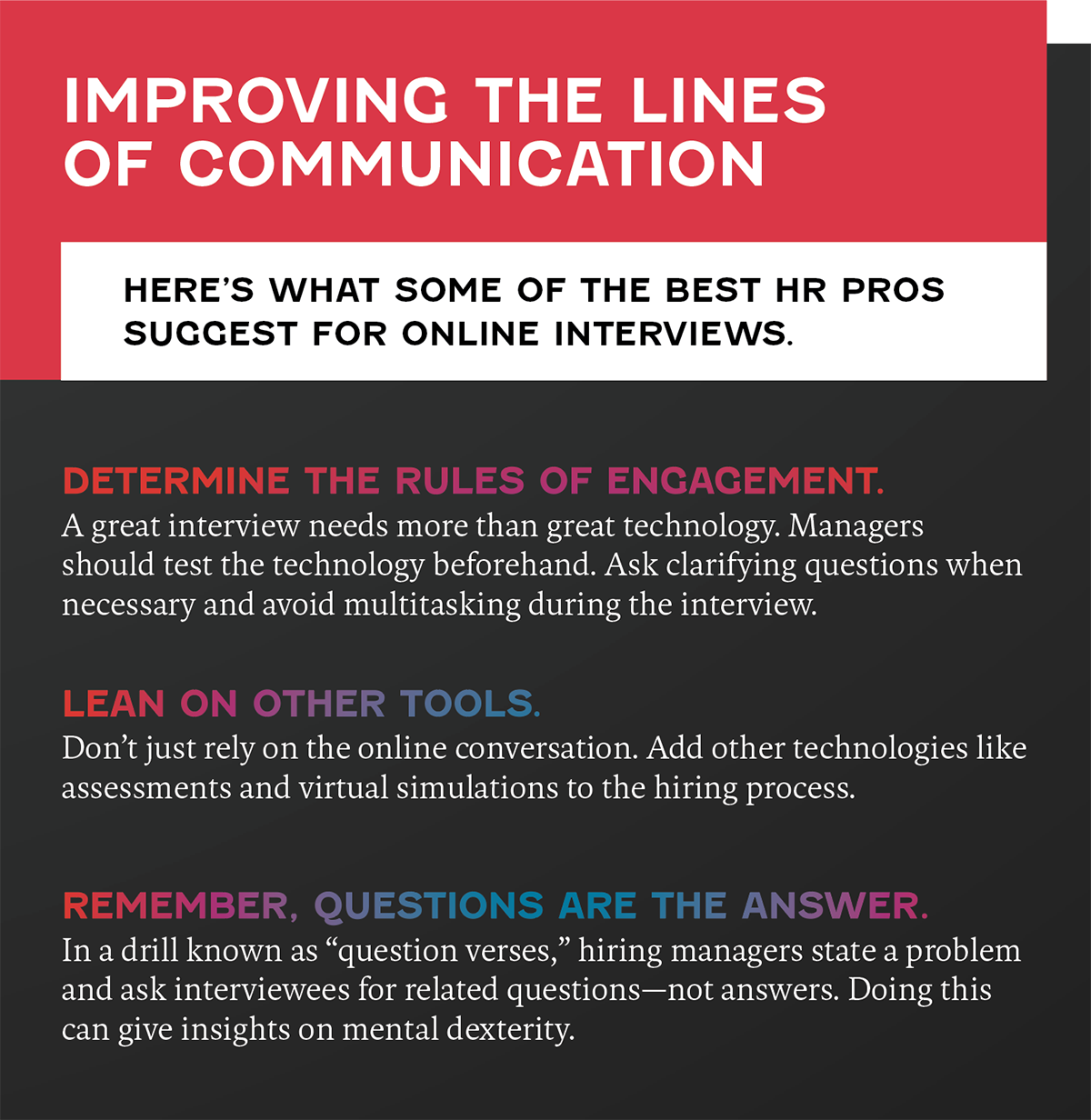 From a recruitment perspective, all this data implies less about the candidate and more about the hiring process itself. Given how COVID-19 has forced companies to ramp up virtual recruitment, even for mass hiring efforts, it’s fair to say leaders will likely start to conduct more and more remote group interviews. For his part, Barenholtz suggests that hiring managers who value one-on-one exchanges should avoid this type of format. “If you feel like you’re a connector, it’s possible that a group interview might not be as conducive to that,” he says.

But experts say no limitation in virtual communication should prevent organizations from moving full steam ahead with remote hiring, especially if they want to thrive in the post-COVID world. “There’s a tendency for organizations to snap back to the way things were because the change didn’t prove itself long enough as a replacement,” says Barbara Dyer, a senior lecturer at the MIT Sloan School of Management and executive director of MIT’s Good Companies, Good Jobs Initiative. “In this case, what’s being revealed are the things that are better and potentially more affordable.”

Although an entirely remote workforce may be more idealist dream than doable reality, the fact remains that the current pandemic has confirmed what many studies have already shown: that remote employees are often more productive and task oriented than their in-office peers. In fact, according to a 2020 Korn Ferry survey, 88 percent of professionals say they get more work done at home than they do on-site. “There is this idea in the business world that virtuality is bad,” says Ina Purvanova, chair of the Department of Management and Organizational Leadership at Drake University. “Now, CEOs are realizing that productivity is higher in the virtual context.”

Leaders are also seeing the cost benefits, too. One recent report found that a typical employer could save roughly $11,000 per year for every person who worked from home half the time. What’s more, the same report showed that remote work will save companies in the United States more than $30 billion a day in what would have been lost productivity caused by COVID-19 office closures.

Then there’s the matter of diversity. Remote hiring can also eliminate many barriers to entry, such as access to childcare or reliable public transportation, “for people who are underrepresented and underemployed but not undercapable,” says Bruce Avolio, executive director of the Center for Leadership and Strategic Thinking at the University of Washington’s Foster School of Business. And by delocalizing their search, hiring managers can tap into a much broader and much more diverse talent pool. “You can get incredibly talented people from every part of the country,” he says. “You can reach out much farther.”

To be sure, firms will have to deploy a few different tactics to compensate for communication constraints in remote hiring, experts say. They will have to invest in digital platforms, such as artificial-intelligence-based screenings, that better enable virtual recruitment. They will have to employ other tools, like virtual simulation assessments, to gain a full picture of the candidate. They will have to pay closer attention to other factors that may not matter in a face-to-face conversation—like how a candidate handles technological snafus. And they will have to establish a new set of interview norms that take all of these remote issues into account.

At the same time, experts say hiring managers have to keep in mind that any remote interview for the time being is happening in the context of a global pandemic. That tends to throw almost everyone off their best interviewing game. After all, the candidate is trying to cope with compounding challenges—think job searching, playing kindergarten teacher, and caring for a sick loved one. “Employers and potential employees are flustered,” says Hal Gregersen, a senior lecturer at MIT and the author of Questions Are the Answer.

Even when the pandemic ends, Gregersen says, people will still have to deal with its repercussions, whether they’re emotional, mental, social, financial, or all four. Managers, then, should take a few moments before each interview to engage in reflective thinking, acknowledging not only what the candidate may be dealing with (maybe they just had a fight with their teenager who is fuming in the next room) but also to reconnect with themselves and what they have on their plate. “It’s not just about data and skills,” Gregersen says. “There is a deeply emotional element that people are experiencing in this process.”

“Be sensitive and aware of that, and somehow, build that into your remote hiring,” he adds.