Neurodiversity in the workplace: An untapped superpower

Understanding how neurodiverse employees operate in the workplace can help companies thrive.

Are you or any of your coworkers neurodiverse?

Chances are the answer is yes. Approximately 20% of the population is neurodiverse, regardless of demographics. However, there’s a reason you might not know if your coworkers are neurodiverse.

Despite how common it is, neurodiverse (also known as neurodivergent) talent continue to face barriers and discrimination at work. The result? High levels of unemployment, underemployment, pay disparity and undue discipline. “Neurodiverse people may be one of the largest underrepresented groups in the workplace,” says Amelia Haynes, associate researcher at the Korn Ferry Institute, Korn Ferry’s research arm.

What does neurodivergent mean?

Although this movement first began in the 1990s, for many people, the term “neurodiversity” may be new or unfamiliar. Neurodiversity is, by default, broad; there are so many ways that genes can be expressed that diverge from what is considered typical. However, the label usually refers to autism, attention deficit/hyperactivity disorder (ADHD), dyslexia, dyscalculia, dysgraphia, and obsessive-compulsive disorder (OCD). However, some use ”neurodiversity” more broadly to include other neurologically correlated clinical conditions, such as personality disorders and social anxiety disorders.

In other words, neurodivergent people see, feel and experience the world differently as a result of atypical brain function. This means they approach the world’s problems—and its solutions—from unconventional angles.

The benefits of neurodiversity in the workplace

By overlooking neurodivergent talent, Haynes says, organizations are missing out on a powerful opportunity to tap into these unique perspectives, which have the possibility of fueling innovation and growth. “Companies have the chance to leverage the insights of those who see problems and solutions differently,” she adds.

The Korn Ferry Institute’s new report, Neurodiversity: the little-known superpower , found that companies that made neurodiversity a focus of their DE&I (diversity, equity and inclusion) efforts have seen boosts in engagement, performance and profits. In particular, these companies have experienced increased innovation, improved communication, and widespread feelings of psychological safety, leading to more diverse, equitable and inclusive cultures.

Neurodiversity in the workplace statistics

Companies that have seen the most success recruiting and developing neurodivergent talent have grounded their hiring strategies in their own talent and business priorities, guided by inclusive and accountable leaders. Consider a two-pronged approach to inclusive program design:

For example, interviews can be particularly difficult for many neurodiverse candidates. To alleviate that pressure, some companies are providing alternative options to traditional behavioral interviews, such as giving candidates the interview questions ahead of time, which may help those who struggle with communication or linear and chronological processing.

Additionally, hiring managers would do well to focus on the characteristics and talents that actually add value to the role, rather than on how they personally connect to candidates, which will mitigate bias against those who are different in any way. It also allows organizations to match neurodiverse talent with job responsibilities that are ideally suited to their skills (for example, pattern recognition, visualization and abstract thinking).

In-person interviews are already stressful for nearly everyone. Add an unfamiliar location, unknown protocols and new acquaintances—all factors that are incredibly anxiety-inducing for many neurodivergent people.

To start mitigating this anxiety, share information, such as expected dress code and parking instructions, in order to help candidates prepare for the interview. Once the candidate arrives, hiring managers or assistants can meet them at the door and walk them to the interview room, removing the pressure of navigating an unfamiliar location alone. After the interview is over, communicating next steps for both parties clearly can be extremely helpful for those who experience anxiety and/or extreme emotional sensitivity and pain triggered by the perception of a rejection or criticism (referred to as rejection sensitive dysphoria). 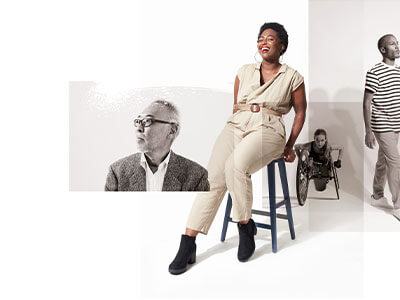 Unleashing the power of all of us.

You won’t always know if an employee is neurodiverse. Neurodiverse people, after all, have the right to choose whether they tell people or not, and many choose not to disclose to avoid the very real stigma that exists around neurodiversity in the workplace. That’s why companies need to approach practices and structures through an inclusive design lens. Neurodiverse people shouldn’t need to self-identify and ask for support in order for an organization to build systems that work for them. Rather, companies should build systems with those specific needs already in mind. A neurodiverse person, then, would not have to ask for support because the tools and resources they need would already be in place. And when you design for neurodiversity—and the structures and practices established to support neurodiverse talent—you build something that works for everyone.

Here are some strategies for supporting neurodivergent talent as organizations and leaders, as well as how to thrive if you are neurodivergent.

How organizations can support neurodiverse employees

There are many accommodations organizations can make to the work environment that allows people to maintain or increase productivity, while alleviating common struggles. Consider these environment changes for people with sensory issues:

An important step with any accommodation is ensuring the rest of your employees are on board and won’t judge or gossip about those receiving accommodations.

Beyond making accommodations to enhance productivity, think carefully about how to best leverage the unique strengths that each person, neurodivergent or not, brings to the organization. If they are super-focused, where is that most useful? If they move quickly from one topic to another, is there a role where multitasking is needed? Think about the jobs currently in your organization. Establish what is mission critical and where there is room for flexibility.

How leaders can support neurodiverse talent from the top down

Be authentic, clear and consistent. Follow up. Say what you mean. Mean what you say. Many neurodiverse people struggle to read or pick up on body language. Be as detailed as possible within your own boundaries. Managers may think that they’re giving off clear social signals with their body language or tone, but their direct reports may not be able to pick up on this.

Managers should try to be aware of signs of overload, such as zoning out, stimming/fidgeting, restlessness, irritability, confusion, or distress. Managers should also find out if there are ways they can support someone experiencing this kind of overload, or better, work together to identify triggers so they can mitigate them before the overload happens. This is not only helpful for neurodiverse employees, but has the potential to yield a happier, healthier workforce across the board.

Support neurodiversity in your workplace today

We operate in a diverse world. To survive, organizations need talent that matches that diversity. To thrive, they need to embrace the power and potential of all people, from neurotypical to neurodivergent.

When organizations support and embrace neurodiversity, they open the door for people who experience the world differently to make a difference. Haynes adds, “In the midst of rising concerns about labor shortages and a shrinking workforce, we’re looking at a vast pool of untapped talent,” Haynes says. “The potential for organizations, if they included and accommodated this talent, is enormous.”

If you’re looking to launch a neurodiversity hiring program or boost neurodivergent participation in the workplace, contact us.